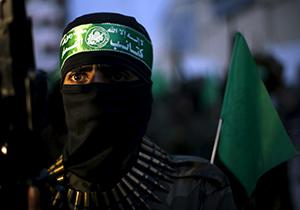 The move is seen as toughening the Islamist movement’s posture in advance of reconciliation talks with Palestinian Authority President Mahmoud Abbas’s Fatah movement.

Hamas has named as its new deputy political chief Saleh el-Arouri, a man best known for attacks against Israeli targets, including, according to Israeli intelligence, the 2014 abduction and murders of Israeli teenagers Gil-Ad Shaer, Eyal Yifrach and Naftali Frankel.

El-Arouri is held responsible by Israel for a long list of terrorist attacks in the West Bank.

The move is seen as toughening the Islamist movement’s posture in advance of reconciliation talks with Palestinian Authority President Mahmoud Abbas’s Fatah movement.

A leading Gaza analyst, Naji Shurrab, noted that Arouri’s being tapped to become deputy to politburo chief Ismail Haniyeh comes at the height of Hamas reconciliation contacts with Fatah. In the view of Shurrab, a political scientist at Al-Azhar University in Gaza, it is meant to strengthen Hamas’s position in unity negotiations and to signal that the movement will not accept Abbas’s political program, including recognition of Israel and acceptance of agreements signed with it.

“Maybe Hamas is sending a message, with [the appointment of] a strong personality close to the Kassam Brigades to strengthen Hamas in the talks with Fatah. Abbas wants Hamas to support his political program, including recognition of Israel, respect for agreements, peaceful resistance and being against violence. But the message here is we can’t make more concessions on the political program.”

Hamas and Fatah negotiators are due to meet under Egyptian auspices in Cairo next week in a bid to advance efforts to end a decade-long division stemming from Hamas’s seizure of the Gaza Strip from Fatah forces.

On Tuesday, the Palestinian Authority cabinet held its first meeting in the Gaza Strip in three years in what was seen as a symbolically significant step toward reconciliation. That was a follow up to Hamas’s decision last month to disband its administrative committee governing the territory.

But the two sides still must overcome major differences, including on security – Abbas is insisting on the disarming of the Kassam Brigades – and the question of integrating 43,000 Hamas-appointed employees in the government.

“Fatah is insisting on more concessions for the surrender of Gaza to the Palestinian government.

But the strategic aim of Hamas is to keep its existence in Gaza. Hamas wants to stop this trend of more concessions with the election of Arouri,” Shurrab said.

However, another Gaza commentator, Mkheimar Abusada, also a political scientist at Al-Azhar University, said it would be a mistake to jump to early conclusions about Arouri.

He noted that Hamas’s new top leader for Gaza, Yahya Sinwar, is also known for his ties to the Kassam Brigades yet he took key decisions in the direction of reconciliation with Fatah.

In Abusada’s view, the main significance of the selection of Arouri, a West Bank native who spent 18 years in Israeli prison and was released from Israeli prison in 2011 as part of the Gilad Schalit deal, is that it indicates Hamas is trying to strike a balance between the West Bank and Gaza. With Haniyeh’s rise to the number one political position in place of Khaled Mashaal and Sinwar’s selection, there may have been concern that the leadership was Gaza-dominated.

Arouri’s selection as deputy “signals the West Bank that you are part of decision-making in the movement,” Abusada said.

After his deportation, he moved to Syria but was forced to leave when ties between Damascus and Hamas ruptured over the Syrian civil war.

He moved to Turkey in 2012 but was forced to leave when Israel and Turkey reconciled in 2015. He moved to Qatar and then Lebanon.

The Palestinian Information Center, a Hamas news site, said Arouri had been elected deputy to Haniyeh and is now “”the Hamas movement’s number two man. Twenty three years of detention and expulsion have not weakened the resolve of the leader Saleh el-Arouri.”