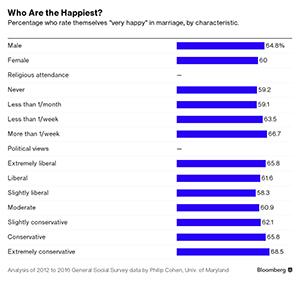 Five big ideas that made the week interesting, and the stories behind them.

1) The Four Key Factors to a Happy Marriage

It’s logical, isn’t it? People who choose to stay married should be happier in their relationships. After all, it’s easier than ever to exit a miserable union, people tend to wait longer before making the jump and many just don’t get married at all. Despite that, the number of Americans who say they’re “very happy” in their marriages has fallen from 68 percent in the early 1970s to 60 percent. There are four types of people who tend to be happiest with the quality of their marriage: those who spend more time at religious centers, people with extreme political views (skewing to either spectrum), those who describe themselves as upper class—and men.

There were 24 electric vehicle models on sale in North America in the third quarter this year. By the close of 2022, there will be 136. Not including hybrids. That’s how badly everybody wants to be in the electric car game, despite the fact that Tesla is burning through cash. (By the end of the year, Elon Musk’s company will have spent $10 billion without even making 10 cents, Bloomberg’s David Welch reports.) In the U.S., sales of electric cars still counted for less than 1 percent of the market last year. Even British inventor James Dyson, better known for hand dryers in public restrooms and swanky vacuum cleaners, wants a piece of the electric car market.

In the wake of the Las Vegas shooting, friends and family searching for information on Google were, for a brief time, being shown links to a thread from 4chan, an unruly online community, at the top of their search bar. Posters on 4chan were spreading false information, such as identifying the wrong suspect, which then went viral. Google blamed an algorithm, but the fake news wasn’t just on one platform. Many people—or accounts—spread fake reports across social media of friends and family being caught up in the crossfire.

4) Tight Security Could Be Everywhere in the Future

On Monday afternoon, people hoping to enter the Wynn resort in Las Vegas had to wait on 10-minute-long security lines to be screened, including bag checks, after the mass shooting outside the Mandalay Bay. Security companies and entertainment destinations are now looking for creative ways to foster a safe environment for customers, without taking away the fun. But as they make it harder to get inside buildings, security consultants are already talking about the need to make it easier to escape from a live shooting, such as at the Pulse nightclub in Orlando, or the Bataclan in Paris.

5) Throw Your Social Security Card in the Trash

No wait, don’t do that. (Tear it up first, at least.) Sometime soon, a Social Security number may no longer be the primary way Americans prove their identity. After the security breach at Equifax Inc., which exposed data belonging to some 145 million Americans, the Trump administration wants to know how the existing system could be replaced. For its part, Equifax agrees. Testifying before Congress, CEO Richard Smith said the U.S. must “think beyond” the idea that a Social Security number is secure. There are two main issues, though. First, no one has come up with the perfect solution. Second, more than 454 million numbers have been handed out. Any change will probably take a long time. Staying safe is at least on the agenda now, and employees may find themselves with an additional perk in 2018, one that protects against identity theft.