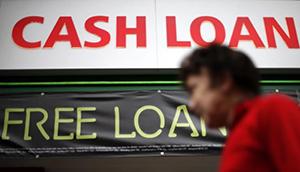 WASHINGTON (Reuters) – Revenues for the $6 billion payday loan industry will shrivel under a new U.S. rule restricting lenders’ ability to profit from high-interest, short-term loans, and much of the business could move to small banks, according to the country’s consumer financial watchdog.

The Consumer Financial Protection Bureau (CFPB) released a regulation on Thursday requiring lenders to determine if borrowers can repay their debts and capping the number of loans lenders can make to a borrower.

The long-anticipated rule still must survive two major challenges before becoming effective in 2019. Republican lawmakers, who often say CFPB regulations are too onerous, want to nullify it in Congress, and the industry has already threatened lawsuits.

Mostly low-income earners use what are known as payday loans – small-dollar advances typically repaid on the borrower’s next payday – for emergency expenses. The lenders generally do not evaluate credit reports for loan eligibility.

Under the new rule, the industry’s revenue will plummet by two-thirds, the CFPB estimated.

The current business model relies on borrowers needing to refinance or roll over existing loans. They pay fees and additional interest that increase lenders’ profits, CFPB Director Richard Cordray said on a call with reporters.

“Lenders actually prefer customers who will re-borrow repeatedly,” he said.

People trapped in that debt cycle can end up paying the equivalent of 300 percent interest, the bureau found in a study it conducted during five years of writing the rule.

“Taking away their access to this line of credit means many more Americans will be left with no choice but to turn to the unregulated loan industry, overseas and elsewhere, while others will simply bounce checks and suffer under the burden of greater debt,” he said.

BRINGING BANKS INTO THE MIX

The agency narrowed the final version of the regulation to focus on short-term borrowings, instead of also including longer-term and installment debt. It exempted many community banks and credit unions from having to ensure borrowers can repay loans, as well.

Both moves could make it easier for financial institutions to fill gaps left by payday lenders who close shop under the new rule.

“Banks and credit unions have shown a willingness to serve these customers with small installment loans, and they can do it at prices that are six times lower than payday loans,” said Nick Bourke, director of the Pew Charitable Trusts’ consumer finance project.

The Office of the Comptroller of the Currency on Thursday lifted restrictions that kept banks from making small-dollar loans, which will further aid in the transition.

But the Community Bankers Association representing retail institutions said only the smallest banks qualify for the exemption, which applies to lenders making 2,500 or fewer short-term loans per year and deriving no more than 10 percent of revenue from those loans.

”The CFPB whiffed at an opportunity to provide assistance to the millions of Americans experiencing financial hardship,” CBA President Richard Hunt said.