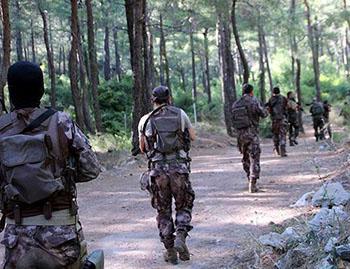 Militants of the outlawed Kurdistan Workers’ Party (PKK) have infiltrated into Turkey’s touristic towns on the Aegean and Mediterranean coasts via the Syrian port city of Latakia, Interior Minister Süleyman Soylu said on Oct. 5.

“Upon the instruction of the organization’s leader staff, its members have come from the Syrian port city of Latakia to the Mediterranean and Aegean and from there they are trying to infiltrate into holiday destinations such as Muğla, Fethiye and Köyceğiz,” Soylu said, answering questions at parliament in the capital Ankara.

Soylu’s comments came after security forces killed five PKK militants in Köyceğiz in the Aegean province of Muğla in an operation on Oct. 5.

Police and gendarmerie forces are continuing their operation to capture two more PKK militants determined to be in the area.

Security forces launched the operation in a forested land of the Toparlar region of the district after attaining intelligence, leading to an armed conflict with the militants near the Toparlar waterfall in the area.

A major was reported to be slightly injured from his leg during the clash. The military dispatched a helicopter to the area for the major’s treatment.

The operation was reported to have been launched in the night time with the cooperation of the 2nd Gendarmerie Commando Brigade of the Aegean province of İzmir’s Bornova district and a police special operations team.

A day earlier on Oct. 4, security forces captured four PKK militants and three others helping them near Muğla’s Seydikemer district.

Authorities said these two militant groups were acting independently of each other.

The militants were preparing for a possible attack in the Refahiye district of the eastern province of Erzincan, according to a statement from the local governor’s office.

Also on Oct. 5, another militant was killed in a counter-terror operation in the Karlıova district of the eastern province of Bingöl, a statement from the local governor’s office said.

Security forces are on the lookout for militants in Erzincan and Bingöl.

According to a statement by the Turkish General Staff, airstrikes destroyed PKK camps and ammunition depots in northern Iraq’s Metina region on Oct. 4.