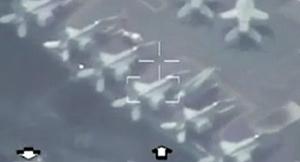 A new report released by the right-leaning Heritage Foundation finds that the perception of the strength of the US military has deteriorated drastically, despite facing a dangerous world.

“For decades, the perception of American strength and resolve has served as a deterrent to adventurous bad actors and tyrannical dictators,” the “2018 Index of US Military Strength,” published October 5, stated.

The report rates the US armed forces posture “marginal,” a score of three out of five, while adding that it is heading toward becoming “weak,” a score of two out of five. The 2017 Index produced identical ratings.

“Regrettably, both that perception — and as a consequence, its deterrent effect — are eroding. The result is an increasingly dangerous world threatening a significantly weaker America.”

Part of the poor showing may be attributed to the fact that Heritage uses a long measuring stick in making assessments: are US forces able to emerge victorious from engagements with two major opposing militaries, even while fighting both at the same time? In this regard, Heritage assessed the US only has a “marginal” capability to accomplish such a goal, despite Congressional appropriations consistently allocating more money to defense than any other nation in the world, including $594.1 billion for FY 2017.

The think tank’s report recommends the US field, for example, 1,200 fighter jets for the US Air Force and 346 ships paired with 624 strike aircraft for the US Navy.

By comparison, the US had 915 warplanes and roughly 277 commissioned naval ships in 2017.

Perhaps most shockingly, the report claims that a mere one-ninth, approximately 11 percent, of the US Air Force’s squadrons are “full-spectrum mission capable,” Wood told the Defense News, meaning the ability to fly “the various profiles,” including flying high, low, and in “contested airspace.”

The world remains a threat-rich environment, the report argues, particularly with respect to Russia, North Korea, Iran, China and Middle East terrorism. On a five point scale, each threat became one level more formidable, except for the Iranian threat, which increased two levels. Russia and China are considered the most formidable threats. China was deemed to have become one level less hostile.

The report also touches on what is currently the biggest flashpoint for the US: North Korea. The Heritage Foundation argues that despite heated rhetoric, the threat posed by North Korea hasn’t actually evolved much since the 2017 Index of US Military Strength was published, even though Pyongyang has accelerated its ballistic missile and nuclear weapons programs.

Speaking with Defense News, the report’s editor, Dakota Wood, said, “They haven’t moved any different types of forces closer to the South Korean border. They haven’t shelled an island or sunk a ship. The missile shots are clearly provocative, but they haven’t put a warhead on the end of them, even a conventional warhead, to blow something up.”