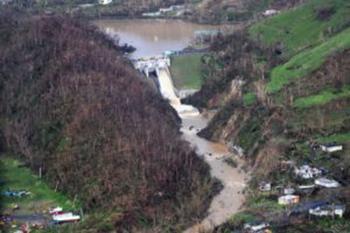 Puerto Rico’s infrastructure, which already faced severe pressures because of the U.S. territory’s huge debt and demands from its creditor, has now been devastated by Hurricane Maria, as Dennis J Bernstein reports.

Though President Trump bragged about the relatively low death toll from Hurricane Maria — 16 at the time of his visit on Tuesday — the number soon jumped to 34 and was expected to rise much more when isolated hospitals could finally report in.

Many of the island’s 59 hospitals were cut off from power and half the island’s 3.4 million inhabitants lacked safe drinking water. The continuing crisis reflected a slow response from the federal government.

Morales is the author of Medicine Stories, Remedios: Stories of Earth and Iron from the History of Puertorriqueñas, and Kindling: Writings On the Body, and co-authored two books with her mother, Rosario Morales.

She created the Vehicle for Change project to research, design, fund and build her chemically accessible mobile home, and is currently traveling around the United States writing about the confluence of ecology, health and social justice struggles for her radio blog Letters from Earth, broadcast on Flashpoints on Pacifica Radio. She writes and performs with Sins Invalid, a Bay Area disability justice performance project. I spoke to Morales on October 2.

Dennis Bernstein: Aurora Levins Morales has been watching the situation very closely. This is your homeland and you must be heartbroken.

Aurora Levins Morales: I am devastated. All of us are desperate for information and there is very little to be had. Most of the island is still out of communication. My home is in a remote mountainous area in the west of the island that has received no help yet at all. Today I wrote a poem, which for me is the clearest way to express what is going on right now. It is called Rumors:

Someone posted a message about the bees, how they search, frantically, everywhere, for the flowers that are gone. They said to put out bowls of sugar water for them, so the bees don’t all die, but no one has sugar, and no one has water.

Someone posted a message from Carrizales, which is just ten buried curves from my home. It said, “The roads into town are broken. We can’t get to the stores. We have no food.” That was days ago.

There are seven springs on my family’s land. I am hoping a few people with machetes can open a path so everyone can drink. I hope there are still springs.

Someone posted an article that said that the morgues are so full, that there isn’t room for one more body, that people are burying their dead themselves, and the governor is still saying that there are only seventeen dead.

Someone posted about the father of a former mayor who died because not all his connections could get him the oxygen he needed.

Someone said people were eating the spoiled food from their dead refrigerators because there was nothing else, and I thought about the smell, of having to hold their noses to swallow it, and about having food poisoning, having diarrhea and vomiting, without water to drink or wash in.

I remember what don Luis heard from his father after San Ciriaco, 1899, how the people dug up the roots of banana plants because there was nothing else to eat, that they must taste of nothing but water and dirt. I remember fifty years ago, how the poorest people crept onto other people’s land to dig up malanga. I whisper: Dig. Don’t give up. Keep digging.

Someone posted pictures, ten buried curves in the other direction from my home, and it looked like November in New England, bare branches, wind burnt brown leaves. It looked like a war zone, with huge bomb sized holes in concrete buildings, and the walls missing. The people who took the pictures could only get so far along that road. They didn’t make it to where my people are.

Someone said the warehouses are full and our hands are empty. Someone posted that they’re dividing each minimal packet of FEMA food into four. A packet of apple sauce. A cracker. A sip of water. Soon they’ll just hand out pictures of food. Let them eat labels.

Whenever they can, the people post picture after picture of themselves hauling broken trees, clearing rubble, carrying each other on their backs, floating each other through contaminated flood waters to dry land, sharing the last of the food.

Here in the far away, we are all tilted, off balance, leaning with our whole selves toward what we love. We post picture after picture of all the boxes we have packed for them, all the money we sent, all the clothes, diapers, medicine, food that went to sit in the warehouses. We keep posting the names of our silences, all the places we have left our unanswered messages.

Without electricity, maybe they don’t know that the man who calls himself president thinks Puerto Ricans sit around waiting, want everything done for us, that he thinks we’re lazy. If they did, maybe their anger would light up the night and start the generators.

It was announced that satellite phones would be airdropped to all the mayors, but they weren’t. Nobody knows what’s going on. Journalists arrive in mud soaked towns and they are the first to get there. The people gather around them asking, Are you FEMA? Eleven days and nobody else has come. No helicopters. No trucks. Only wind.

There was a rumor that the National Guard had just left for Maricao that afternoon, to open the roads, and carry in supplies, but it kept being posted on different days, and there is not a single picture of a national guard giving a bottle of water or a sandwich to anyone in Maricao, so I don’t believe it.

There are people peering over the horizon into next week or the week after and saying the words famine and epidemic. An expert said that the water through which people wade, where children without houses play, is full of sewage. I think cholera and try not to inhale.

The mayor of San Juan, who has waded chest deep through her flooded streets, waded through the official sewage pouring from the presidential mouth says this amounts to genocide.

Someone said, we are no longer dying of hurricane. We are dying of colony.

Dennis Bernstein: Puerto Rico is the quintessential case of environmental racism. For half a century it was used as a bombing target of the US military. Now we have the military saying this is a difficult task and we don’t know what to do on this island that we have been occupying forever. Talk about the military response and also about the mayor versus Trump.

Aurora Levins Morales: How can the US military, the largest and most powerful in the world, have the gall to say that they face a challenge in airlifting diesel fuel for hospital generators, where people are dying because they cannot refrigerate insulin, they cannot run dialysis machines, they cannot run respirators?

Carmen Yulin is absolutely right that this is genocidal. A few days after the hurricane she was saying that we may not be able to get to everyone, and now she is saying we don’t even know how to begin counting the dead. The inability of aid to reach people is so cynical.

And then to have the so-called creditors of this entirely fraudulent debt saying, “Well, they have some bills to pay before we can help them.” Put aside all of the colonial pillage of our country over 119 years by the United States and just look at the Jones Act, which restricts Puerto Rico to receiving goods only on ships flying a US flag, and at double the cost. That is millions and millions of dollars that we have been overcharged since 1920, which would easily pay off the so-called debt in a minute.

It is so cynical to describe this situation as Puerto Rico being in debt to Wall Street. They have been extracting and extracting with no pretense of putting anything back in. Everywhere you go there are signs of coffee farms up for sale. People cannot make a living from the agriculture. They are pressured economically and politically to grow cash crops. We import 80% of what we eat and there is only about two weeks of reserves ever on the island. So the island is always hovering on the brink of famine.

Dennis Bernstein: This is what Trump said about the mayor of Puerto Rico: “Such poor leadership ability by the mayor of San Juan and others in Puerto Rico who are not able to get their workers to help and want everything to be done for them, where it should be a community effort. 10,000 federal workers are now on the island doing a fantastic job. The mayor of San Juan, who was very complimentary only a few days ago, has been told by the Democrats that you must be nasty to Trump.”

Aurora Levins Morales: This is the story that gets told about colonized and oppressed people across time. This is what slaveholders said about the enslaved: lazy, ungrateful, can’t get it together, that’s why they’re slaves. People are doing an amazing job in Puerto Rico of organizing at the community level.

Activists all over the island are out there making sure people are okay. Yes, we have a flaming racist in the White House, but remember that the PROMESA Act came into being under Obama. That was a great big present to Wall Street. This was the so-called “rescue” of Puerto Rico which took over our economy entirely and put it in the hands of an appointed board of fiscal control that can override any decision of our elected government.

They are basically selling off all of our public assets and gutting all of our government services in order to pay a fraudulent debt to predatory lenders on Wall Street. It is a massive armed robbery of our people. Now the indignation of the Puerto Rican people has reached a fever pitch. People are demanding that the PROMESA Act as well as the Jones Act be revoked right now, that the debt be cancelled and that we be given a whole lot of money to rebuild, or our country is dead. There is no way to recover without that.

It reminds me of the differences in how the Haitian earthquake was covered in the US media and in the Latin American leftist media. The American media made it sound like those Haitians died because they just don’t know how to build good houses. Not that Haiti has been under economic attack in revenge for the slave uprising two hundred years ago. The left Latin American countries are saying, we have a debt to Haiti because of what they did for all of us.

It is the same narrative with Puerto Rico, that people are just sitting around waiting to be rescued. Nobody is sitting and waiting for anything.