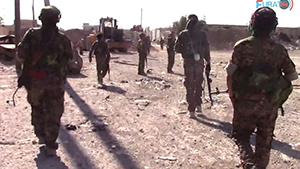 Let’s hope Winston Churchill was correct that Americans always do the right thing after exhausting all other options, for we are running out of bad options to try in Syria.  Now maybe we can try supporting Syria’s Sunni Arabs against both ISIS and the Assad regime.  That approach is the only one that can secure America’s vital interests in Syria.

The U.S. has fantasized about many other options.  We’ve hoped that the problem would go away, that Assad would fall, that he would win, that the Russians would help fight the Islamic State, that they’d help against Iran, that the Turks would also help.

The U.S. has also pursued some policies in Syria that we hoped would suffice:  that the minority Kurds would be our army, that precision airstrikes would be enough to contain al Qaeda, that we could muster a Sunni opposition to fight ISIS without helping it fight Assad.

Americans must accept a disturbing reality about Syria—ISIS and al Qaeda are simply not the biggest threats the Sunni Arabs there face. Assad and his Russian and Iranian controllers pose an existential threat to the Sunni, seeking to re-oppress and in some areas eliminate them entirely.

The Trump administration has subtly changed our approach, striking the Assad regime when it used chemical weapons—again—and shooting down Iranian drones and Syrian planes when they seemed to threaten our forces.  But the change so far is superficial.  Trump policy retains the bedrock of Obama administration policy: focus on fighting ISIS first and deal with al Qaeda and Iran only in subsequent phases.

The war rages on in the meantime, radicalizing Sunni populations in the region and around the globe, killing hundreds of thousands and displacing millions.  Syria still hosts the largest and most dangerous concentration of Salafi-jihadi fighters and leaders anywhere in the world with the possible exception of Pakistan.  It is time to face the fact that subtle policy shifts will not alter this dire reality.

Let’s cast our minds back to the start of this conflict in 2011, before there was ISIS, when there was only a small and irrelevant cadre of al Qaeda in Syria.

The Sunni Arabs (and other parts of the Syrian population) took up arms against Assad because he was (and is) a vicious, repressive, dictator from a minority population—similar to uprisings in Egypt, Tunisia, Libya, Yemen, and elsewhere in the Arab Spring.

But Assad did not cede power or lose his nerve as other dictators did. And he was able to call in reinforcements—Iranian military advisors and steadily-increasing numbers of Iranian troops and their proxies began to flow into Syria in 2011 and 2012, allowing Assad to match growing opposition with growing brutality.

The Syrian opposition to Assad began as an overwhelmingly secular force led largely by defectors from the Syrian Arab Army—many, but by no means all, Sunni.  They sought Assad’s overthrow and replacement by a secular government that they hoped to control.

Al Qaeda remained sidelined by this movement, coming to the fore only after Assad’s use of starvation, barrel-bombs, artillery barrages against civilian areas, and finally chemical weapons, brought no military response from the U.S. despite President Obama’s avowed “red line.”

The West’s abandonment of the Sunni Arab community to its fate at the hands of such a monster drove many to seek the support of the only groups willing and able to help them survive—the Salafi-jihadi movement.  That is how and why al Qaeda and then ISIS got first a toe-hold and then a choke-hold on the Syrian opposition.

We can’t turn back time, nor simply undo that choke-hold.  But we can recognize a truth that has been staring us in the face for six years now—the Assad regime’s attempts to re-impose oppressive minoritarian rule by vicious brutality is the principal driver of radicalization in Syria.

Allowing the regime to do so while the U.S. raised a Kurdish army to fight ISIS has only deepened the conviction in the minds of many Sunni Arabs that the U.S. really supports Assad and Iran.  The West’s refusal to back the Sunni Arab opposition in any meaningful way almost ends any hope of discussion.

The U.S. has supported Sunni Arabs in Syria, of course, and continues to do so in a limited way—but only to fight ISIS.  Our support has largely been conditioned on promises that they not fight Assad—which is why our attempts to recruit local Sunni Arab forces have produced such feeble results.

Americans must accept a disturbing reality about Syria—ISIS and al Qaeda are simply not the biggest threats the Sunni Arabs there face.  Assad and his Russian and Iranian controllers pose an existential threat to the Sunni Arab community, which they seek to re-oppress and in some areas eliminate entirely.

ISIS and al Qaeda do not want that.  ISIS wants to govern, however insanely, Syria’s Sunni population. Al Qaeda insists only that the Syrian Sunni be governed in a manner of which it approves.  Both groups kill, displace, and brutalize Sunni, but they also try to provide basic services—which the regime does not do.

The Sunni opposition wants help against Assad first, and only then against the Salafi-jihadis.  We must align our phasing with theirs to gain the only allies who can actually help us achieve our national security requirements.  But we must not swing too far in this direction either, giving the impression that we want to help the Sunni Arabs in Syria—or Iraq—impose sectarian regimes of their own.

The balance is tricky, but we can and must find it.

So perhaps it’s time to try the one thing we’ve refused to do—work with Syria’s Sunni Arabs against Assad, Iran, and the Salafi-jihadis.  This suggestion has the additional benefit of cohering with a strategy to combat Iranian malign activities and military deployments in the Middle East that the Trump administration promises to roll out shortly.

This strategy is problematic, especially after years of policies that have created justified mistrust of America’s intentions. It is risky and might fail.  But it is the only approach that can actually work.

Frederick W. Kagan is the Christopher DeMuth Scholar and Director of the Critical Threats Project at the American Enterprise Institute