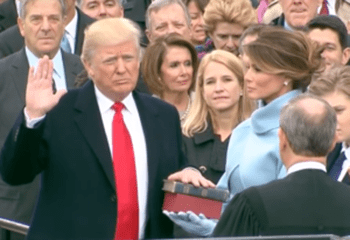 President Donald Trump’s administration told the U.S. Supreme Court Thursday it should dismiss its pending case over the president’s travel ban, an action that would let lower courts take the first look at the most recent version.

In a letter filed at the court’s request, the administration said two appeals it filed earlier this year will be legally moot in a matter of weeks as an earlier ban expires.

Two sets of challengers, however, urged the high court to decide the case, even while saying the justices may prefer to let lower courts hear arguments on the new order.

The high court has already dropped the travel-ban argument it had scheduled for Oct. 10 but hasn’t decided what to do with the underlying case.

The revised policy, issued Sept. 24, limits or bans entry into the U.S. from eight countries: Iran, Libya, Somalia, Syria, Chad, North Korea and Venezuela. It supersedes a ban that had affected six mostly Muslim countries. The new policy is already facing challenges in the federal district courts around the country.

“The lower courts should be considering challenges to the proclamation anew based on its text, operation and findings — all of which are materially different” from the president’s earlier executive order issued in March, U.S. Solicitor General Noel Francisco said in a letter to the high court.

Opponents of the policy say Trump is exceeding his authority under federal immigration laws and violating the Constitution by targeting Muslims. They say the revisions don’t fundamentally change a policy they describe as a “Muslim ban.”

The new version “despite some new window dressing — continues to relay a message of disparagement to the plaintiffs and other members of their faith,” the American Civil Liberties Union, representing Maryland opponents of the order, said in a letter to the court. The new policy is “invalid for the same reasons” as the March order, ACLU lawyer Omar Jadwat wrote.

The lawyer for Hawaii, another challenger, said the expiration of the March order isn’t reason to dismiss the case. Under previous Supreme Court decisions, the administration must show that it won’t re-impose the policies found to be unlawful by the lower courts, Neal Katyal wrote.

That’s not possible given that the new travel ban “replicates the constitutional and statutory defects of the first,” Katyal wrote.

The two sides also disagree on how the justices should handle the lower court decisions that blocked the earlier policy. The Trump administration is asking the court to set aside those rulings, a move that would prevent them from being cited as legal precedents for future cases. The challengers said that, if the court drops the case, it should leave those opinions intact.