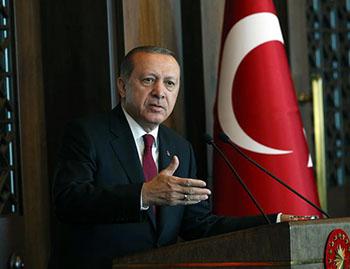 “The referendum is a cause, not an effect. The effect is what will come. On one side there is Iran, in the north there is Turkey, in the south there is the Iraqi government, in the West there is Syria. What will you do? Where will you go? All air spaces will also be closed, the flights are already suspended. Who will come? How will you go? Soon, the borders will also be closed. How will you be able to exit and enter,” Erdoğan said on Oct. 5 in a meeting with opinion leaders from the southeastern provinces of Turkey.

His remarks came one day after meeting his Iranian counterpart Hassan Rouhani in Tehran, where the two countries agreed on their stance against the KRG’s referendum bid, saying that they will take joint measures against the referendum.

Reiterating Ankara’s objection to an independent Kurdish government in the region, Erdoğan said on Oct. 5 that KRG’s efforts to form an independent entity “aims to encircle Turkey from the south.”

“This encircling is not just limited to our physical borders; I am talking about a bigger plot including our territory. We will spoil that plot as we have spoiled others with God’s will and my nation’s strength,” he said.

“Who gave you that right? Only Israel is supporting you. You have the former foreign minister of France [Bernard Kouchner] on one side and another Jew [Bernard-Henri Levy] on another, working at the table together. They are not your friends. They will be on your side today, they will disappear tomorrow. You will then look at us,” he added.

Speaking to reporters on his flight back from a one-day trip to Iran on Oct. 4, Erdoğan said Turkey, Iran and Iraq will jointly decide on closing the flow of oil from northern Iraq.

“In the case of northern Iraq, Iran and Turkey will form a tripartite mechanism and will decide on shutting down the oil [from the KRG],” Erdoğan said.

The KRG currently exports its oil to international markets via a pipeline that passes through Turkey.

“The increase in oil prices would be better for Russia. Doesn’t Mr. Putin want oil prices to rise? He should have joked,” Erdoğan said, adding that cutting the oil flow was a call by the countries in the region.

Last month, Russian oil giant Rosneft clinched a gas pipeline deal in the KRG to help it become a major exporter of gas to Turkey and Europe. The pipeline will be constructed in 2019 and exports are projected to begin in 2020.

Saudi Arabia’s King Salman said at the start of talks in Moscow with Putin on Oct. 5 that the territorial integrity of Iraq must be preserved.

Erdoğan, also once again blasted the inclusion of the contested oil-rich city of Kirkuk in the referendum, saying the Kurds “have no legitimacy there.”

Iran and Turkey have already threatened to join Baghdad in imposing economic sanctions on the KRG and have launched joint military exercises with Iraqi troops on their borders after the independence referendum on Sept. 25.

Military move in Syria ‘an option’

Turkey will not hesitate to carry out a military operation into Syria’s Afrin region, which is under the control of the People’s Protection Units (YPG), Presidential Spokesperson İbrahim Kalın said on Oct. 5, while adding that a de-escalation zone in the rebel-held Idlib will begin being established in the coming days.

“Turkey will continue to take these kinds of steps, as it did in the past, because it prioritizes its own national interests. Turkey will not hesitate to act for its own security when and where it is deemed necessary,” Kalın told the state-run Turkish Radio and Television

Corporation (TRT) in an interview when asked whether Turkey would conduct an intervention into the YPG-held Afrin, a group Turkey considers a terrorist organization.

The Turkish Armed Forces (TSK) has long been reinforcing its military deployment on the Syrian border in a bid to act in the event of a threat against its borders.

Kalın recalled Turkey’s Euphrates Shield operation, which it launched to clear northern Syria from the Islamic State of Iraq and the Levant (ISIL) and provide the security of an area of nearly 2,000 square kilometers.