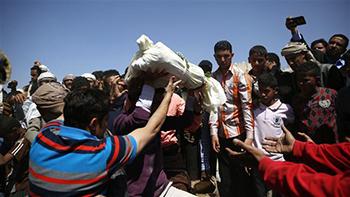 The United Nations has blacklisted the Saudi-led coalition for infanticide during its war on Yemen, prompting fresh calls from rights bodies for pressure on Riyadh to end the military campaign.

The annual blacklist, released by UN Secretary General Antonio Guterres on Thursday, said the actions of the Riyadh-led alliance in Yemen “objectively led to that party being listed for the killing and maiming of children.”

The world body said that the coalition had been responsible for 683 child casualties and 38 verified attacks on schools and hospitals in 2016.

The report was the UN Children and Armed Conflict envoy Virginia Gamba and issued in the name of Guterres.

The UN chief said the blacklist was “not only to raise awareness,” but also to “promote measures that can diminish the tragic plight of children in conflict.”

Bahrain, Kuwait, the United Arab Emirates, Egypt, Jordan, Morocco, and Sudan are part of the Saudi-led coalition, which has been bombarding Yemen since early 2015 to restore its Riyadh-friendly government.

More than 12,000 people have died since the onset of the attacks, according to the latest tallies by local monitoring group.

The new list also includes militants associated with the former Yemeni administration, who have been heavily armed by Saudi Arabia, as well as the Houthi Ansarullah movement, which has been defending the country against the Saudi aggression.

In an apparent attempt to avoid Saudi anger, Guterres had already held talks with King Salman before releasing the list, which does not subject those on the list to any UN action.

Saudi Arabia was briefly included on the annual list of shame last year, but was later removed after the kingdom threatened to cut off its funding to UN programs.

Riyadh has denied either pressuring the UN to omit its name or failing to respect its obligations under international humanitarian law.

The new blacklist has been sent to the UN Security Council for examination.

This is while council members such as the United States, the United Kingdom and France have been supporting the Saudi war against the Arab world’s poorest nation by selling it weapons and providing it with logistical and advisory support.

New York-based Human Rights Watch applauded the blacklisting, urging for a halt to all arms sales to the Saudi kingdom.

“Until this happens, governments should suspend all Saudi weapons sales,” she said.

The new blacklist was released days after Riyadh successfully lobbied the UN Human Rights Council against the launch of an independent international investigation into its atrocities in Yemen.

Despite calls for such a probe, the council approved a resolution, which merely calls for sending a group of “eminent experts” to Yemen. Riyadh had threatened to restrict trade and diplomatic ties with the council members backing a much more robust version of the document.