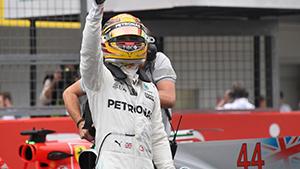 Lewis Hamilton is a hot 1/3 favourite for the Japanese Grand Prix after cruising to his 71st career pole at Suzuka.

Lewis Hamilton stormed to pole position for the Japanese Grand Prix as title rival Sebastian Vettel could not get close to the Mercedes.

After out-scoring Vettel with an under-performing car in the last two races, Mercedes were back to their dominant best at Suzuka.

Hamilton’s record 71st pole position was never in doubt and he will be joined on the front-row by the Ferrari of Vettel – who was third fastest but moves up after the second Mercedes of Valtteri Bottas was hit with a grid penalty.

This was Hamilton’s maiden pole position at Suzuka, his other two Japanese Grand Prix poles coming at Fuji.

But he has won here twice in the past and is now just 1/3 to make it a hat-trick of victories on Sunday and take another huge step towards a fourth world championship; he’s 1/10 for title glory.

Vettel is out to 11/4 for victory here with Daniel Ricciardo and Bottas both 16/1 shots.

Hamilton clocked a time of one minute 27.319 seconds to breeze to pole, with Bottas getting closest.

The Finn takes a five-place penalty for an unscheduled gearbox change so at least Vettel will be alongside Hamilton at the start as he looks to close the 34-point gap in the championship standings.

The Red Bull pair of Daniel Ricciardo and Max Verstappen will occupy the second row, while Esteban Ocon benefitted from Kimi Raikkonen’s own gearbox change penalty and will start fifth.

Bottas is now sixth ahead of the second Force India of Sergio Perez, while Felipe Massa’s Williams, the McLaren and Stoffel Vandoorne and Renault’s Nico Hulkenberg also start inside the top 10.

That is because Raikkonen could only manage the sixth-fastest time and so will drop to 11th, while Fernando Alonso reached Q3 but will start from the back after his own 35-place penalty.

The first qualifying session was cut short by a red flag after Romain Grosjean crashed his Haas at turn five.