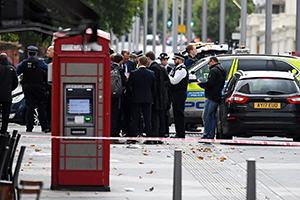 By Steve Geimann and Rupert Rowling

A car ran into pedestrians outside London’s Natural History Museum, injuring at least 11 people including nine who were taken to a hospital, according to a Metropolitan Police statement that said the incident wasn’t terror related.

A man detained at the scene was arrested and is in custody at a London police station, the police said Saturday in a statement. The suspect was among those injured, police said.

The injuries aren’t believed to be life-threatening or life-changing, the police said.

The accident occurred near the museum entrance on Exhibition Road, which is across the street from the iconic Victoria and Albert Museum and adjacent to the Science Museum.