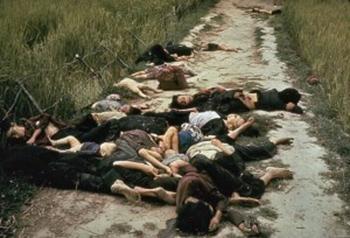 Americans like to view their country as a force for peace in the world when the historical reality is almost the opposite, a reality ignored by the PBS Vietnam War documentary, writes Lawrence Davidson.

If you go to the Wikipedia page that gives a timeline of U.S. foreign military operations between 1775 and 2010, you are likely to come away in shock. It seems that ever since the founding of the country, the United States has been at war. It is as if Americans just could not (and still cannot) sit still, but had to (and still have to) force themselves on others through military action.

Often this is aimed at controlling foreign resources, thus forcing upon others the consequences of their own capitalist avarice. At other times the violence is spurred on by an ideology that confuses U.S. interests with civilization and freedom. Only very rarely is Washington out there on the side of the angels. Regardless, the bottom line seems to be that peace has never been a deeply ingrained cultural value for the citizens of the United States. As pertains to foreign policy, America’s national culture is a war culture.

It is against this historical backdrop that the recent Ken Burns 18-hour-long documentary on the Vietnam War comes off as superficial. There is a subtle suggestion that while those American leaders who initiated and escalated the war were certainly deceptive, murderously stubborn and even self-deluded, they were so in what they considered to be a good cause. They wanted to stop the spread of Communism at a time when the Cold War defined almost all of foreign policy, and if that meant denying the Vietnamese the right of national unification, so be it. The Burns documentary is a visual demonstration of the fact that such a strategy could not work. Nonetheless, American leaders, both civilian and military, could not let go.

What the Burns documentary does not tell us – and it is this that makes the work superficial – is that none of this was new. Almost all preceding American violence abroad had been rationalized by the same or related set of excuses that kept the Vietnam slaughter going: the Revolutionary War was about “liberty,” the genocidal wars against the Native Americans were about spreading “civilization,” the wars against Mexico and Spain were about spreading “freedom,” and once capitalism became officially synonymous with freedom, the dozens of bloody incursions into Central and South America also became about our “right” to carry on “free enterprise.” As time went by, when Washington wasn’t spreading “freedom,” it was defending it. And so it goes, round and round.

Understanding the history of this ghastly process, one is likely to lose all faith in such rationales. However, it seems obvious that a large number of Americans, including most of their leaders, know very little of the history of American wars (as against knowing a lot of idealized pseudo-history). That is why Ken Burns and his associates can show us the awfulness of the Vietnam War to little avail. The average viewer will have no accurate historical context to understand it, and thus it becomes just an isolated tragedy. While it all might have gone fatally wrong, the American leaders were assumed to be well intentioned.

Describing the Vietnam War in terms of intentions is simply insufficient. In the case of war the hard-and-fast consequences of one’s actions are more important than one’s intentions. The United States killed roughly 2 million Vietnamese civilians for ideological reasons that its own leaders, and most of its citizens, never questioned.

Most of its citizens, but not all. There was, of course, a widespread and multifaceted anti-war movement. The anti-war protesters were, in truth, the real heroes, the real patriots of the moment. Along with the accumulating body bags, it was the anti-war movement that brought an end to the slaughter. However, once more Burns’s documentary comes off as superficial.

Burns leaves the viewer with the impression that the only truly legitimate anti-war protesters were veterans and those associated with veterans. But those were only a small part of a much larger whole. Yet the millions of other Americans who protested the war are essentially slandered by Burns. The documentary presents them as mostly Communist fellow-travelers. We also see various representatives of that non-veteran part of the movement apologize for their positions. There is the implication that the movement had bad tactics.

Here is an example: one of the points that the Burns documentary makes is how distasteful was the labeling of returning soldiers as “baby killers.” Actually this did not happen very often, but when it did, one might judge the charge as impolitic – but not inaccurate. You can’t kill 2 million civilians without killing a lot of babies. If we understand war in terms of the death of babies, then there might be fewer wars.

U.S. leaders also sent 58,000 of their own citizens to die in Vietnam. Why did these citizens go? After all, this was not like World War II. North Vietnam had not attacked the United States (the Bay of Tonkin incident was misrepresented to Congress). The Vietcong were not Nazis. But you need an accurate take on history to recognize these facts, and that was, as usual, missing. And so, believing their politicians, the generals, and most of their civic leaders, many draftees and volunteers went to die or be maimed under false pretenses.

The inevitable post-war disillusionment was seen by subsequent U.S. leaders as a form of mental illness, and they labeled it “the Vietnam Syndrome.” The “syndrome” was as short-lived as popular memory. In March 2003, President George W. Bush invaded Iraq under false pretenses and U.S. forces proceeded to kill half a million civilians.

In the end, American behavior in Vietnam was not just tragically flawed – it was criminal. But it was also historically consistent – an expression of a long-standing and deep-seated war culture, a culture that still defines the American worldview and has become the very linchpin of its domestic economy. That is why the wars, large and small, never stop.

A Gun Culture, Too

America’s propensity to violence in other lands is but one side of a two-sided coin. Callous disregard for civilian lives abroad is matched by a willful promotion of violence at home. That willful promotion is the product of a right-wing ideological orientation (stemming from a misreading of the Second Amendment to the U.S. Constitution) that demands a nearly open-ended right of all Americans to own an almost unlimited number and types of firearms. The result is gun regulation laws that are embarrassingly ineffective.

Again, the consequences of this position are much more profound than any claim that its supporters’ intentions are to defend citizens rights to own guns. Since 1968 about as many Americans have been killed in-country by gun violence (1.53 million) as have died in all of America’s wars put together (1.20 million). The numbers are too close to be dismissed as coincidence. Both reflect a culture of exceptionalism that grants at once the United States government, and its citizens, extensive rights to act in disregard of the safety and security of others.

You would think Americans would recognize an obvious contradiction here. You cannot maintain a safe population and, at the same time, allow citizens the right to own and, largely at their own discretion, use firearms. Nonetheless, some Americans imagine that they have squared this circle by claiming that their guns are for “self-defense” and therefore do make for a safer society.

This is just like the U.S. government’s constant exposition that all its violence is committed in the name of civilization and freedom. In both cases we have a dangerous delusion. Ubiquitous gun ownership makes us unsafe, just as does the endless waging of war.

The inability to see straight is not the sort of failing that can be restricted to one dimension. If you can’t grasp reality due to ideological blinkers or historical ignorance, you are going to end up in trouble both at home and abroad – not just one place, but both.

And, the more weaponized you are, both as a state and as a citizen, the greater the potential for disaster. In the end the United States cannot stop killing civilians abroad unless it finds the wisdom to stop killing its own citizens at home – and vice versa. That is the U.S. conundrum, whether America’s 320 million citizens realize it or not.