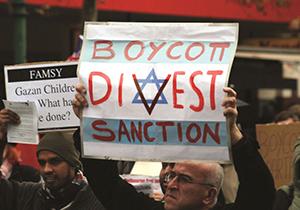 “The BDS [Boycott, Divestment, Sanctions] campaign is, in its totality, antisemitic, hostile to Israel, reactionary and anti-enlightenment,” stated the text of a recent party resolution.

The Green Party in the southern German state of Bavaria on Saturday passed a resolution rejecting the Boycott, Divestment and Sanctions campaign because of antisemitism, at the same time urging its party affiliates to pull the plug on BDS activities targeting the Jewish state.

“The BDS campaign is, in its totality, antisemitic, hostile to Israel, reactionary and anti-enlightenment,” stated the text of the resolution.

The resolution noted that “BDS positions and demands delegitimize and demonize Israel and thereby assign all blame for every evil in the region to Jews.”

The document continued, “Israel is the only democratic state and at the same time double standards are applied to Israel when, for example, the criminality of Hamas is ignored or played down.”

The Bavarian Greens said the “call for a boycott reproduces the National Socialist slogan ‘Don’t buy from Jews!’”

The party urged all affiliates of the Greens, including the federal party, which is expected to be in Chancellor Angela Merkel’s new coalition government, to not cooperate with BDS.

The youth organization of the Green Party in Bavaria initiated the anti-BDS resolution. Eva Lettenbauer, a spokeswoman for the Green Youth organization, said the antisemitic BDS campaign “does not recognize Israel’s right to exist” and aggressively attempts to damage Israel via boycotts.

In 2013, Green Party MPs pushed a BDS initiative in the Bundestag to demarcate Israeli products produced in the disputed territories for punishment.

“We especially demand that the Petra-Kelly-Foundation and the Heinrich Böll-Foundation stop every form of cooperation, as well as financial or logistical with BDS groups” and bar such activities in the future, said the Bavarian Greens.

The Heinrich Böll-Foundation is the Green Party’s think tank and has offices across the Middle East.

A Thursday event at the Heinrich Böll-Foundation in Beirut Lebanon titled “50 years of occupation, 50- years of resilience” appears to have involved anti-Israel activists. The pro-Hezbollah moderator, Sahar Mandour, signed a petition against Israel in 2006 stating her support for Hezbollah’s war against Israel. “Our conscious support for the Lebanese national resistance as it wages a war in defense of our sovereignty and independence, a war to release Lebanese imprisoned in Israel,” stated the petition.

Sergey Lagodinsky, head of the EU/North America Department of the Heinrich Böll Foundation in Berlin, told The Jerusalem Post on Sunday, “I applaud the resolution of the Greens in Bavaria, since my opposition against BDS and against discrimination of Israel is well known within the party and I have communicated in on multiple occasions, e.g. within the Federal Working Group on international politics.”

When asked if Heinrich Böll will stop anti-Israeli events, including the cited event in Beirut, he said,” I cannot speak for the foundation, since I am not in charge of it.  I can only say this: Under my supervision there have never been a single event which could be characterized as pro-BDS and/or anti-Israel. And there will never be as long as I am in charge of my department.”

Jerusalem Post queries to the Böll headquarters in Germany were not immediately returned on Sunday.

The head of the Heinrich Böll’s Tel Aviv office, Kerstin Müller, supported labeling of Jewish products from the disputed territories in 2013 while she was an MP in the Bundestag. “So long as Ms. Müller demands the labeling of goods from only one country in the world, namely Israel, she is acting in an antisemitic way,” Dr. Gideon Joffe, head of Germany’s largest Jewish community (10,500) in Berlin, told the Post at the time.

The German Green politician and activist Petra Kelly was a founding member of the Green Party. The foundation in her name has worked closely with the pro-BDS Jewish-Palestinian Dialogue Group. She was instrumental in founding the German Green Party

Gesa Tiedemann, the executive director of the Petra Kelly Foundation, told the Post the foundation has “never carried out BDS and anti-Israel events or participated in such events, organizationally or financially.”

Bavaria’s capital Munich has been rocked over nearly two years with a series of pro-BDS events in its city subsidized cultural centers Gasteig and Eine-Welt-Haus. Munich’s city council responded with a proposed to law to outlaw BDS events in city buildings.

The legislation, titled “Against every form of antisemitism – No cooperation with the antisemitic BDS [boycott, divestment, sanctions] movement,” is expected to be enacted this year.

When asked on Sunday about the Bavarian Green Party resolution calling on affiliates to stop cooperation with BDS activity, the Green Party’s Stuttgart Mayor Fritz Kuhn and the party’s Baden-Württemberg’s governor Winfried Kretschmann did not immediately respond to Post media queries.

Leading Green Party members across Germany have played a role in advancing BDS, according to critics.

The Green Party president of Baden-Württemberg, Winfried Kretschmann, personally delivered in late March a check for €30,000 ($32,000) to a Lutheran pastor in the West Bank who advocates the destruction of Israel. The €30,000 is ostensibly for solar energy technology for the Dar Al Kalima University College of Arts and Culture Bethlehem run by Raheb.