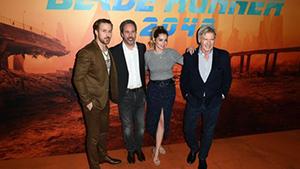 Blade Runner 2049 has made far less than expected on its opening weekend at the US box office.

The $31.5m (£24.1m) total will be a major disappointment for distributor Warner Bros, which had projected ticket sales of between $45m and $50m.

Its 163-minute running time, limiting the number of screenings, was said to be one factor in the under-performance.

But it was still the weekend’s most popular movie in the US. It topped the UK box office, with sales above £6m.

The sequel to the 1982 cult classic, which also stars Harrison Ford as well as Ryan Gosling, cost Sony and Alcon Entertainment $150m to make.

Despite strong advance ticket sales and glowing reviews from many critics, the movie made $12.7m on Thursday night and Friday, $11.4m on Saturday and a projected $7.4m on Sunday from just over 4,000 cinemas.

Paul Dergarabedian, senior media analyst with comScore, said: “The core of enthusiastic and loyal ‘Blade Runner’ fans were over 25 and predominantly male, and propelled the film as expected to the top spot, but a lengthy running time and lesser interest among females made it tougher for the film to reach the original weekend box office projections.”

Men over 25 accounted for half the audience, according to PostTrack, with women over 25 making up 27%.

Jeff Goldstein, of Warner Bros, said Blade Runner 2049 had disappointed in smaller cities and in the South and Midwest, where the running time and baseball playoffs appeared to have deterred moviegoers.

“We did well in the major and high-profile markets,” he said. “Alcon and Denis [Villeneuve, the director] made an amazing movie. The audience for it was narrower than we anticipated.”

Globally, the film took $50.2m and claimed the number one spot in 45 of its 63 markets, Screen Daily reported.

That tally was higher than the $44.6m for The Martian, starring Matt Damon, on its opening weekend in 2015. The movie was directed by Ridley Scott, who also made the original Blade Runner and was an executive producer on 2049.

The remake of the Stephen King killer clown thriller It has now taken $305m in the US, and almost as much internationally, to top the $600m mark globally, making it the most successful horror film.

UK moviegoers have been its biggest fans, spending $40.7m (£31.1m) on tickets since its release on 8 September.