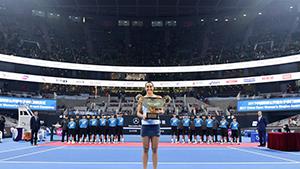 Halep, who will top the rankings for the first time when they come out on Monday, required treatment on a leg injury early in the second set.

But in a pivotal seventh game of the second set, she wasted no fewer than nine break points before Garcia eventually held serve.

Garcia, of France, went on to take the tie-break before dropping to her knees in celebration of a first career win over her Romanian opponent.

The victory also puts Garcia ahead of Britain’s Johanna Konta in the race to reach the WTA Finals in Singapore.

Konta must now reach the final of the Kremlin Cup, which starts on October 16, to qualify.