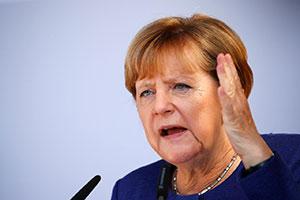 Chancellor Angela Merkel’s CDU and Bavarian sister party CSU have discussed a plan for coalition talks with the FDP and the Greens. A CSU proposal to allow only 200,000 immigrants per year has been one issue of debate.

Leaders of Chancellor Angela Merkel’s Christian Democratic Union (CDU) met with their counterparts from the Bavarian Christian Social Union (CSU) in Berlin on Sunday, where they discussed a common strategy on migration. Following the September election, the two allies are attempting to come up with a united platform for coalition talks with other parties.

The CSU has repeatedly bumped heads with the chancellor on migration policy, demanding a limit of 200,000 migrants and refugees per year.  Merkel has long rejected the proposal of CSU leader Horst Seehofer as unconstitutional.

The migrant issue helped fuel the rise of the far-right Alternative for Germany (AfD) party, which placed third in last month’s election after it poached votes from the CSU and CDU, as well as from parties on the left.

Sunday’s 10-hour marathon talks were reported late in the evening to have led to an agreement in principle on migration and refugee policy. A formal statement is expected around midday on Monday.

Start of a migration law?

DW’s Rupert Wiederwald said the compromise could be the “beginning of a migration law,” something that could get the support of the Greens and Free Democrats (FDP) as Merkel heads into coalition-building talks with the two parties.

According to a text shared with the DPA news agency, the CDU and CSU now aim to limit the number of migrants entering Germany to 200,000 per year. However, there is no reference to a cap on migration, and it would not touch the fundamental right to political asylum. There is expected to be a distinction made between political refugees and economic migrants.

The CDU and CSU are expected to propose protecting the EU’s external borders, sending back migrants to their home countries if they don’t qualify for asylum, and working with transit and source countries of migrants. A law for entry of skilled migrants is also expected.

Ahead of the discussions on Sunday, the CSU had published a 10-point summary of their demands to present to Merkel. The Bavarian party has a focus on patriotism, promoting a “guiding culture” of German values and fighting the right-wing, populist Alternative for Germany (AfD):

“We must fight the AfD head-on — and fight to get their voters back,” according to the text published in mass-circulation tabloid Bild am Sonntag, which suggested that “conservatism is sexy again.”

The AfD, which was founded only four years ago, managed to win over 12 percent of the vote in September. Much of its success came at the expense of mainstream conservatives. It is the first time in more than 50 years that a far-right party has held seats in Germany’s legislature.

The conservatives aren’t the only ones set on curbing the influence of the country’s third-most powerful party. The center-left The Social Democratic Party (SPD) has ruled out another grand coalition with Merkel’s CDU/CSU, instead vowing to lead the opposition in parliament.

Deep into the night

The differences in policies and outlook across the parties is expected to mean months of negotiations before a new government is formed, but there is also pressure to speed up the process. With Germany serving as the EU’s economic engine, a prolonged political battle could have economic implications that ripple beyond the country’s borders.

“We must form a government quickly. This is about more than just us,” Interior Minister Thomas de Maiziere, from Merkel’s CDU party, said Saturday.