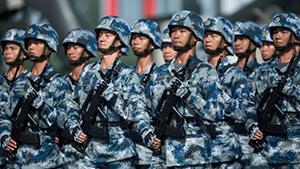 Of the many noteworthy developments that have characterised Chinese President Xi Jinping’s first five-year term, none stands out as much as military reform, and this reveals a great deal about the coming political trajectory in China, writes political analyst Cheng Li.

Xi Jinping did not shy from the bold and broad undertaking of military reform and it has resulted in profound changes to the People’s Liberation Army (PLA).

Even beyond the monumental purges of top generals, whose shameless corruption extended to practices like selling military titles, Mr Xi has worked with single-minded purpose to organise and modernise China’s military.

His efforts have centred on marginalising the four so-called “general departments” of the PLA that functioned as a virtual arm of government the military leadership and had undermined the authority of the civilian-led Central Military Commission (CMC).

He also transformed China’s military operations from a Russian-style, army-centric system toward what analysts call a “Western-style joint command”; and swiftly promoted “young guards” to top positions in the officer corps.

It will take years to fully assess the impact of these reforms. But further changes appear to be in the works.

Judging from the list of military and police delegates to the forthcoming congress where China’s future leaders are to be unveiled, the largest turnover of senior officers in the history of the People’s Republic of China (PRC) is set to occur.

An extraordinary 90% of the 300 military delegates will be first-time attendees.

At most, only 17% (seven of 41) of the military representatives with full membership on the 18th Central Committee will retain their seats.

This would constitute the largest-ever turnover of military elite in the history of the PRC.

In addition to their perceived loyalty to Xi Jinping, these generals are known for their extended military service, combat experience, and professional knowledge of modern warfare.

With firm control over the military, Mr Xi has set the stage for a massive turnover in the party leadership at the 19th Party Congress.

Of the 376 members of the 18th Central Committee, 38 (about 10%) have already been purged on corruption charges and other transgressions.

In addition, about 200 members (53% of the committee) have either retired or will soon retire and, so will not be considered for the 19th Central Committee.

So the turnover rate between the 18th and 19th Central Committees could be as high as 70%, making it the largest turnover since the 9th Party Congress in 1969 at the peak of the Cultural Revolution.

But Mr Xi can also make a strong case that the overall objective of his anti-corruption campaign has been to restore faith in a ruling party that had lost trust among the Chinese public.

Nevertheless, Mr Xi and his strongest political ally, the anti-corruption tsar Wang Qishan, seem to understand that the unprecedentedly widespread campaign has earned them many political enemies.

What began with the military ends with the civilian administration.

The biggest risk for Mr Xi and Mr Wang is that, having purged a large crop of corrupt officials, they have become wary of spending political capital to accelerate institutional reforms.

This may explain why they have striven to win public support and demonstrate that the leadership agenda aligns with the country’s best interests.

Just as military reform aimed to assert civilian control over the military and spur its modernisation through initiatives like structural transformation and a strategic overhaul, the upcoming congress will likely pursue some structural changes, which can move toward improving governance.

But what does this mean for the make-up of the all-powerful Politburo Standing Committee?

Mr Xi’s confidants in the current Politburo – director of the general office of the Chinese Communist Party’s Central Committee Li Zhanshu, and director of the central organisation department Zhao Leji – will most likely enter it.

Protégés from his years in Zhejiang province who were known for their strong support for market reform, namely Chongqing party secretary Chen Min’er, Jiangsu party secretary Li Qiang, and Beijing party secretary Cai Qi, are positioned to obtain seats in the new Politburo – Mr Chen and Li Qiang may even be contenders for the Standing Committee.

Shanghai party secretary Han Zheng and director of the office of the central economic leading group Liu He, two seasoned economic technocrats, are expected to emerge as two of the top economic decision-makers in the national leadership after the congress.

While strong ties to Mr Xi help explain their rapid political career advancement in recent years, a number of civilian leaders, except for Cai Qi, already serve on the Central Committee as full or alternate members.

Institutional norms and regulations, including age requirements, continue to apply to these leaders’ expected promotion path.

It is almost certain that the new Politburo, including the Standing Committee, will consist of a few leaders who are protégés of Mr Xi’s predecessors.

Jiang Zemin’s confidant Xu Qiliang, who also has a good relationship with Mr Xi, will likely remain as both a Politburo member and vice chairman of the CMC after the 19th Party Congress.

Hu Chunhua, a sixth-generation front-runner and protégé of Hu Jintao, is also a strong contender for the Politburo Standing Committee.

So the biggest question will be whether or not Xi Jinping unites the party establishment by forming a team of rivals and deepening China’s political institutionalisation.

Abiding by established rules and norms and respecting the peaceful transition of power all carry profound implications for the future direction of the country.

More than the success or failure of any single campaign or initiative, observers in China and abroad are eager to see how Xi Jinping and his colleagues address this crucial issue in just a few short weeks.

Cheng Li is Director of and Senior Fellow in the John L. Thornton China Center at The Brookings Institution. His latest books include Chinese Politics in the Xi Jinping Era: Reassessing Collective Leadership (2016) and The Power of Ideas: The Rising Influence of Thinkers and Think Tanks in China (2017).