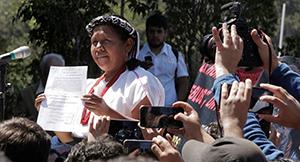 On Saturday, an indigenous woman supported by the Zapatista movement her intention to run as an independent candidate in next year’s presidential election in Mexico.

Candidate Maria de Jesus Patricio Martinez of the Zapatista Army of National Liberation — a left wing political and militant group from the southernmost Mexican state of Chiapas — is a spokeswoman for the National Indigenous Congress, an organization that claims on their website to be “a space of unity, reflection and organization of the indigenous peoples of Mexico.”

Martinez, who was selected in May 2017 to run in the July 1, 2018, election, has pledged to run her campaign with no government funding, Reuters reported.

The ruling centrist Institutional Revolutionary Party of incumbent President Enrique Pena Nieto has not yet selected its candidate.

Currently, 10 first-time candidates who have registered as independents are in the running for the 2018 election, although three have not yet met the necessary requirements to officially campaign.

Last week, an independent former member of the Party of the Democratic Revolution registered to participate, while on Saturday, Nuevo Leon Governor Jaime Rodriguez, a former Institutional Revolutionary Party member, also announced their run for the presidency