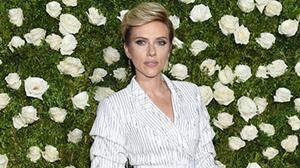 Saturday Night Live after-parties are the stuff of folklore and last week’s was no exception. Ryan Gosling, fresh off hosting the evening’s episode, was there with his girlfriend, Eva Mendez. Jay-Z attended with Beyonce. And Scarlett Johansson rolled up in her car – the kind Mr Big used to ride in – to join Colin Jost, the head writer at Saturday Night Live. The guy who, if gossip is to be believed, has had to accept being Johansson’s part-time boyfriend for the last few months.

Jost is a handsome Harvard graduate who used to date Rashida Jones. And yet Johansson is a full-blown movie star who has succeeded in straddling both action franchises and her own pet projects in a way few of her peers have. She’s also enjoyed the status of sexiest woman on earth for about a decade now.

Perhaps this disparity explains why Johansson didn’t accompany Jost to the Emmys, leaving him to make a feeble excuse about her working (who hasn’t heard that before). It further explains why, if she’s coming to an after-party, she’s refusing to be photographed alongside Jost, and leaving alone.

“Jost – noun/verb: Someone with no official status, neither a boyfriend or a girlfriend, but lives one level up from a bootycall.”

It’s a fair question. Foxx might offer the excuse of not wanting to offend his friend Tom Cruise. Still, four years is a long time to deny knowing the woman you’re in a deeply serious relationship with. And this is the fine line that must be trodden by the, shall we say, “lesser” partner. Are they hiding that person because they don’t want to “get caught” by an ex or the paparazzi? Or are they simply embarrassed by them?

“[Partners] can be embarrassing because they ‘represent one another’ ” is how Mark Leary, a professor of psychology and neuroscience who studies shame explained it to The Wall Street Journal.

According to Leary, the shame is actually about a loss of control. If we’re the ones who are embarrassed, at least we can remove ourselves from the situation. But if it’s a partner, then damage control is that little bit more difficult. “It’s the uncertainty that gets us,” Leary says. “How bad is this going to get?”

For celebrities such as Leonardo DiCaprio, the problem of potential embarrassment is easily solved – by keeping the relationship short. He is always careful to break up with whichever model he’s seeing before award ceremony season, thereby ensuring they’re never interviewed on the red carpet.

In fact, the last time he brought a date with him to a red carpet event was in 2005, back when he was dating model Gisele Bundchen. DiCaprio’s second-longest relationship, with model Bar Refaeli, whom he dated on and off between 2006 and 2011, held an important caveat: no red carpet snaps. “I am there for him and I am at all the events” is how the model justified it to People Magazine in 2010.

“I just don’t walk in hand-in-hand with him. I don’t see any reason. I don’t need to strike poses with him in front of the cameras.”

This might partially explain the dynamic between the ill-fated romance between singers Rihanna and Drake. The pair’s relationship began in 2009, but by 2010 Drake was complaining to The New York Times, “She was doing exactly what I’ve done to so many women throughout my life, which is show them quality time, then disappear.”

Though they collaborated together numerous times over the following years, with Drake always eager to solidify their relationship status, using billboards, Instagram and his own concerts, Rihanna was not, telling Vanity Fair in 2015 that her only relationship has been with Chris Brown.

Even when they were technically together, and Drake made a moving speech about being in love with Rihanna before presenting her with the Video Vanguard Award last year, Rihanna was hostile to his displays of affection, turning her face when he kissed her on stage, so that it landed on her cheek. It’s hard not to feel some sympathy for Drake, as it appears he can’t help himself but shout from the rooftops about his love for Rihanna. Unfortunately, this may be the very thing that Rihanna, a woman who is notoriously private about her paramours, might be annoyed by.

“When you’re annoyed, it often says more about you than about your partner” is how psychologist Deborah L. Davis explained it in an article for Psychology Today. “Perhaps your partner’s behaviour reminds you of your own detested shortcomings. Perhaps his or her habits are highlighting your own inability to stick to your standards…”

Her advice? “When you feel annoyed, look in the mirror and turn your focus toward yourself.”

The added bonus of this sort of self-reflection just might be dating someone you’re not ashamed to be with.