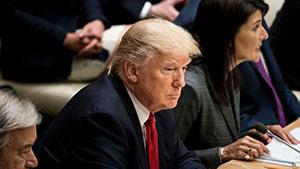 The Trump administration has issued a list of immigration priorities that threaten to derail a deal with Democrats on protecting young immigrants known as “Dreamers.” They include building Trump’s promised border wall.

US President Donald Trump on Sunday presented congressional leaders with a list of hard-line policy wishes that he says must be enacted in exchange for a deal with Democrats to protect hundreds of thousands of young immigrants from deportation.

The list includes the construction of Trump’s long-promised — and controversial — wall along the US-Mexico border and speeding up deportation of visa overstayers. Trump also calls in the list for an end to “extended-family chain migration,” limiting family-based green cards to spouses and minor children.

The demands include some policies that Democrats say are off the table, and thus could potentially derail ongoing negotiations over protecting young immigrants from deportation, many of whom were brought to the US illegally as children. The immigrants, known as “Dreamers,” had been given a reprieve from deportation and permission to work legally in the country under President Barack Obama’s Deferred Action for Childhood Arrivals, or DACA, program.

Trump ended the program last month, but gave Congress six months to come up with alternative legislation to prevent recipients from losing their status.