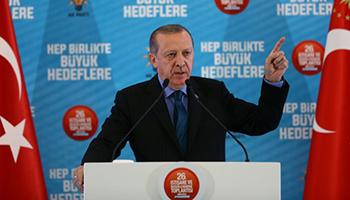 Turkish President Recep Tayyip Erdoğan on Sunday addressed Western countries concerning expectations of the extradition of their citizens jailed in Turkey, saying the West must first give Turkey the people it wants from them, the T24 news website reported.

“There are decisions about them [Gülen movement people] taken by our courts. And they [Westerners] are trying to get some people from us. Sorry about that. If you [Western countries] want to get some people from us, you have to first give us those we want from you,” said Erdoğan during a speech at the ruling Justice and Development Party (AKP) consultation and assessment retreat in Afyonkarahisar province.

Calling people linked with the Gülen movement religious “deviants,” Erdoğan said his government would not let them be comfortable in the East or the West.

Erdoğan also claimed that the Gülen movement was behind the Gezi Park protests in 2013. The Turkish president said whoever says the opposite is either “ignorant” or “part of the same treason.”

Erdoğan last month said US authorities should extradite Turkish Islamic scholar Fethullah Gülen in return for releasing American pastor Andrew Brunson, who has been jailed in Turkey since October 2016.

“I can’t imagine that we would go down that road,” said US State Department spokesperson Heather Nauert in response to Erdoğan’s remarks.

“President Erdoğan’s suggestion that the US should make a hostage-style prisoner swap for an innocent American imprisoned in Turkey is appalling and will not be taken seriously. Turkey has long been a US ally, but has chosen to complicate and weaken its relationship with the US and other free nations of the world through its increasingly autocratic policies. The US will not stand idly by as these oppressive tactics target American citizens. Turkish officials responsible for the prolonged, unjust imprisonment of Dr. Andrew Brunson, or any American, should be denied the privilege of entry in the US,” said United States Senator for Oklahoma James Lankford in a statement released in response to Erdoğan.