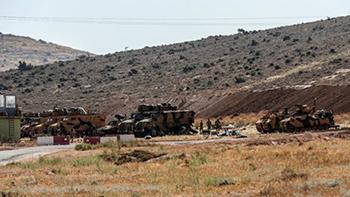 Turkish President Recep Tayyip Erdoğan on Sunday said Turkey would not allow a Kurdish corridor in Syria extending along the Turkish border to the Mediterranean while assessing Turkish military operations in the Idlib region of Syria, the state-run TRT Haber reported.

“We have to prevent a terror corridor that was planned from the furthest east [in Syria] to the Mediterranean. We will not permit it. If we allow it we will face a new Kobani. Sorry about that. We will not let it happen again,” said Erdoğan during his closing address to the ruling Justice and Development Party (AKP) consultation and assessment retreat in Afyonkarahisar province.

“Whoever says and thinks whatever, we will not let Turkey be pushed into a corner with threats from Iraq and Syria,” added Erdoğan, evaluating both the Turkish operations in Syria and the independence referendum held recently by the Kurdistan Regional Government (KRG) in northern Iraq.

“Let us repeat our statement for those who are enemies of Turkey: We can come suddenly one night.”

Erdoğan on Aug. 23 said the Syrian Kurdish Democratic Union Party (PYD) was trying to create a corridor to the Mediterranean Sea in northern Syria, warning that Turkey would not allow this whatever the cost.