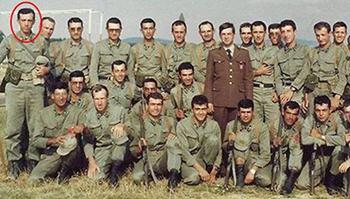 The Doğan News Agency (DHA), one of the outlets of a conglomerate owned by Aydın Doğan, on Sunday posted a photo of President Recep Tayyip Erdoğan serving in the military, as the Turkish Armed Forces started bombing Syria’s Idlib province on Sunday.

The picture shows Erdoğan with a group of reserve officers at the Tuzla Infantry School in 1982.

“Commander-in-chief Recep Tayyip Erdoğan stands in this photo in military uniform, as a ‘very active soldier’,” said DHA in the story accompanying the photo.

The photo was shared two days after Kerem Kılıçdaroğlu, son of main opposition Republican People’s Party (CHP) Chairman Kemal Kılıçdaroğlu, was sworn in during a ceremony for people who were starting their military service.

Burak Erdoğan, the elder son of President Erdoğan, did not serve in the military due to a medical report, while his younger brother, Bilal Erdoğan, was exempted from long-term military service by paying a required amount of money.

Erdoğan’s photo was criticized on social media for being leaked on the day that the Turkish military started the operation in the Idlib region of Syria. Turkey plans to enter İdlib province to guarantee a truce in the region, as part of an agreement with Russia and İran.

Aydın Doğan, who owns several media outlets including DHA, Hürriyet and the Hürriyet Daily News, has been at the center of criticism for giving his media organization over to the service of Erdoğan.