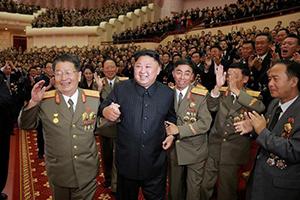 Get caught up on what’s moving markets in Asia.

Trump tweets about North Korea, Chinese markets come back from holiday, and there’s plenty of economic data due out this week. Here are some of the things people in markets are talking about.

President Donald Trump returned to his outlandish statements against North Korea in a series of tweets. In comments this weekend, he said “Presidents and their administrations have been talking to North Korea for 25 years, agreements made and massive amounts of money paid hasn’t worked, agreements violated before the ink was dry, makings fools of U.S. negotiators.” He went on to add that “only one thing will work,” implying he may have settled on a military option against North Korea and its leader Kim Jong Un. Meanwhile, Kim has promoted his sister to the ruling party’s political wing, and reports are saying that North Korea is planning to test a missile that its officials claim could be capable of reaching the U.S. West Coast.

New Zealand’s next government has now started its formation process after election results showed both main parties could form viable coalitions. The ruling National Party and Labour opposition started separate negotiations Sunday with the nationalist New Zealand First Party. The parties would need support of the nationalist party in order to reach a majority. October 12 has been set as the deadline for a decision by New Zealand First leader Winston Peters. The kiwi dollar dropped as the uncertainty rolls on, down 0.5 percent and buying 70.60 U.S cents as of 9:40 a.m. local time.

Equity traders are back at their desks in China following the Golden Week holiday closure, a period that’s been broadly supportive for risk assets. Indeed the Hang Seng China Enterprises Index of mainland firms trading in Hong Kong is up 5 percent since Sept. 29, the most recent trading day in Shanghai. South Korea, Taiwan and Japan are closed today for holidays. Hang Seng, Nikkei 225 and S&P/ASX 200 equity futures are all trading slightly lower.

Japanese Prime Minister Shinzo Abe told debate attendees that it’s too early to talk about an exit from monetary easing. At an event hosted by the Japan National Press Club on Sunday, Abe said he is leaving the issue to the Bank of Japan, adding that he and Haruhiko Kuroda are in agreement on the 2 percent inflation target, but that he’s leaving the decisions of what tools are used to achieve that and move toward exit from easing to the Bank of Japan governor.

China’s retail and restaurant sales during the Oct. 1-8 National Day holidays rose 10.3 percent from last year to 1.5 trillion yuan, according to a statement posted Sunday on the Ministry of Commerce’s website. Last year, retail and catering sales gained 10.7% for the holiday. On Monday the Caixin services industries PMI will be released, followed later in the day by Australia’s foreign reserves report for September. Meanwhile, Bangladesh September exports fell 10 percent year over year, which was below target.