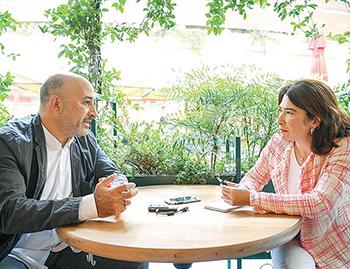 The government has attempted to temper public anger over planned tax increases by linking them to military spending, according to Uğur Gürses, an economic columnist for daily Hürriyet.

“Deputy Prime Minister Mehmet Şimsek said tax hikes are needed to buy weapons systems. This is the first time I have ever seen a decision on economic policy being associated with the defense industry,” Gürses told the Hürriyet Daily News.

Commenting on the recently announced medium-term economic program, he also suggested that the driving forve of growth will be household consumption but credit will be hard to come by.

What do you make of the government’s recently announced medium-term program [OVP]?

The OVP foresees Turkey growing at 5.5 percent over the course of the next three years. The engine of this growth will be household consumption. The OVP assumes that 1.8 percent of that growth will come from investments, but that does not look possible in the current circumstances because since 2011 there has been no increase in investments from the private sector. Political factors, including the ongoing state of emergency, also play a role in this phenomenon today.

Maybe there is a view that investments will come from the construction sector. But prices in the housing sector are falling and purchases in this sector are slowing down. In addition, it is not as easy as it was in the past to access credit. It does not look feasible for banks to generate resources for credit from domestic means. Of the 200 billion Turkish Liras in credit given to companies within the framework of credit guarantee fund [KGF], only 50 billion liras were financed by savings. The rest came from resources from abroad and from swaps. This shows us that Turkey will have an acute resource problem in the coming ahead. The start of the U.S. Federal Reserve’s quantitative tightening will mean that financial conditions get tighter for developing countries like us. There will be less capital flow to Turkey, and as banks’ capacity to generate resources for credit shrinks, so will the credit available for consumers and traders. These conditions will lead to a slower growth in Turkey. We can already observe it in the commercial sector in big cities like Istanbul, Ankara and İzmir, where we see many empty stores.

We also have continuing losses in the tourism sector, and the OVP’s claim that tourism revenues will reach $23 billion in 2018 is too optimistic. The story presented by the government in the program is that Turkey will leave the middle-income group and enter the upper-income group of countries. According to the World Bank, high-income economies are those with a GDP per capita of $12,235 or more, and the government predicts that Turkey will reach $13 million GDP per capita by 2020. But this projection is based on the estimate that the average exchange rate for lira against the dollar will be around 4.02. This estimation is even below the rise in inflation, estimating a 13 percent depreciation in the lira by 2020.

Overall the OVP presents a too rosy picture. Its estimations do not correspond to reality. What’s more, the political landscape is nowhere in evidence in this picture. If we carry on until 2019 under the state of emergency, thinking that household consumption and investments from companies will just go on as if everything is normal is just wrong.

Why do you think the state of emergency has such an impact? President Erdoğan says it has no impact on daily life. The issue of tax has also been controversial of late, so what do you say about the rise in taxes?

The government saw an economic slowdown last year and created the credit guarantee fund [KGF] mechanism. The Treasury thus became a guarantor and banks issued 200 billion liras in additional credits. Most of the recipients of these credits were small and medium-sized enterprises. The government also introduced incentives for employment.
Such measures have created an additional burden on the budget, increasing the Treasury’s need for speedy borrowing. This has created an upward pressure on interest rates. The government wants to close the budget deficit but at the same time the trend for further borrowing looks likely to continue. This has led the government to take additional measures. It has effectively said: “We won’t lower our spending but we will increase revenues. The taxes introduced – like the 40 percent hike on vehicle prices and the rise in income taxes – will reduce the disposable income of the middle classes. The measures have drawn a reaction from parts of society but it remains to be seen if the government will take a step back. There is no sign that the government will increase savings.

If the government does not lower its spending, does that mean that we are already entering an “election economy” ahead of the three elections due to take place in 2019?

The increasing of taxes does not correspond to that. Maybe they thought of simply collecting more taxes from wealthier segments of society that are more likely to own a house and car. But the end result is that the burden falls on the shoulders of the middle-income group, and the number of people in the middle-income group in Turkey has increased over the last 10 to 15 years. When you impose tax on that group you risk angering your constituency. Perhaps this shows that the government did not make proper political calculations

I don’t recall a government ever justifying a rise in taxes with reference to security needs. Was this a first?

I don’t recall any similar case in the past. Deputy Prime Minister Mehmet Şimsek said tax hikes are needed to buy weapons systems. This is the first time I have ever seen a decision on economic policy being associated with the defense industry.
This is simply an attempt to present tax rises to society with the sauce of nationalism. When we look at the budget we do not see a tremendous hike in defense spending. There has indeed been a rise, but we don’t see a huge deficit that requires additional financing.

It may be a wise from the government to try to sugarcoat tax rises.

The government could try to assuage reactions by asking: “How can you object to defense spending?” But although we may hide some things under the carpet, one way or another they will back come to haunt us and we will have to pay the price.

There is also controversy over the rise in the borrowing ceiling.

An omnibus law was brought to parliament last week which includes a rise in the borrowing ceiling, as the Treasury had exceeded its borrowing ceiling. According to the Public Finance and Debt Management Law [PFDM], the Treasury can borrow only 10 percent more than the difference between its revenues and expenditures. If it needs more, then either there needs to be a change in the budget law or an additional budget law needs to be passed by parliament.
In the current PFDM law it says that the borrowing ceiling cannot be increased. The government cannot just come to parliament and say “I increase my borrowing by 37 billion lira.” That would be against the law. This law dates back to 2001 and consists of one of the most important reforms to ensure financial discipline after the financial crisis of the time. What the government recently did is illegal.

Illegal, but there seems to be no sanction against it.

Those who should criticize this are monitoring organs like the Court of Accounts [Sayıştay]. They used to do so in the past but there is no inspection left. This is also about respect for the “power of the purse,” democracy, and the voters. Governments that do not respect the law also increase the risk premium of the country.

Indeed. Under normal circumstances, a political party could take such an issue to the Constitutional Court. Government politicians get upset whenever Turkey’s credit rating is lowered, but this is directly related to such moves. The thought of bypassing a law may look pragmatic to politicians but from abroad such actions are seen as the erosion of institutionalization of the system.

Has the government started to follow populist economic policies?

I cannot definitively say economic policy is on a populist track, but at least the dose of populism is slowly increasing. The positive conditions between 2002 and 2009, when Turkey was strongly anchored to the EU, as well as the generous financial flow after 2009, raised the water levels so high that once the waters are started to retreat we were left with our mistakes and all those unrealized reforms. That is why the trend for populist policies is getting stronger.

What keeps you from saying that the government is pursuing populist policies?

There is still some discipline maintained in certain areas. With the KGF or the incentives brought for employment, you see that they are not open-ended. There are still some limits. We don’t see fiscal loosening in all areas. But that does not mean we won’t see it in the future. Maybe the government thinks it is too early at the moment. It may not want to resort to it right now in order to keep it for the future, to deploy before the elections.

Who is Uğur Gürses?

Uğur Gürses is an economic columnist for daily Hürriyet. Born in 1963 in Ankara, he graduated from the Economics Department at Ankara University’s Faculty of Political Sciences in 1985.

He started his professional career in 1986 in the Foreign Exchange Transactions Division of Turkey’s Central Bank before working on portfolio and reserve management, foreign exchange policy, and open market operations.

Gürses moved into the private sector in 1994, and worked for a number of banks as an executive manager. His focused on treasury activities. After leaving the banking sector in 2000, Gürses began to present a TV program on financial markets on private broadcaster CNN Türk. He has also written regular articles on business and financial markets for daily newspapers and his analyses are also published in the Hüriyet Daily News.