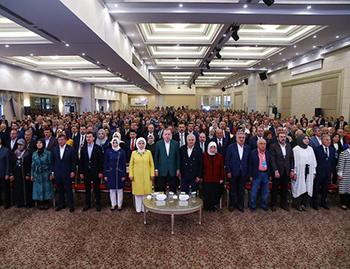 Turkish President Recep Tayyip Erdoğan once again warned on Oct. 7 that “reform and renewal” is needed across the ruling Justice and Development Party (AKP) – or the people will do so at the ballot box.

“Resisting change is like rowing against the tide. I have been saying for a while now that there is a need for renewal in our organizations and municipalities,” Erdoğan said during the AKP’s 26th semi-annual “consultation and assessment camp,” addressing party members in the western province of Afyonkarahisar.

“This is not my personal choice or a method that our party has come up on its own. This is in fact our people’s demand. We have to undertake this renewal process, need for change, and demand for refreshing, with our own will. If we do not do this ourselves, our people will do it at the ballot boxes,” he added.

Erdoğan also referred to the ongoing controversy over the removal and resignation of a number of high-profile local AKP mayors, saying that “if there are mayors who need to rest, the necessary steps will be taken.”

“If some of our party organizations need to be reformed, we will of course do that. If some of our mayors need to rest or be assigned to other positions, we will do what’s necessary. No one should be offended by this,” Erdoğan added.

The president has in recent months been criticizing the AKP’s organizations for suffering from what he calls “metal fatigue,” and structural changes in the party are among the main topics of the consultation camp. The party has its eye on the three planned elections due to take place in 2019 – local, parliamentary and presidential – when the system change stipulated by the constitutional amendment narrowly passed in the April 2017 referendum fully goes into effect.

During his speech, Erdoğan said the AKP has “always been on the side of the people” and needs to “move in the direction that the people point to.”

“What are people saying to us? Change and reform. The people want reforms from us. They expect bigger aims and bigger projects,” he added.

“Our political upbringing has the understanding of ‘a duty is not asked for, but granted.’ Those who come with elections also go with elections. But no one can disregard the process that leads to elections,” he said, stressing that reform in the party’s local and national organizations is “natural.”

“What is more natural than us strengthening our party with new names? It is wrong to expect the AKP to stay the same when Turkey is changing, just like it is wrong to expect Turkey to remain in the same position when the world is changing. We have never cut our ties with the reform process since our foundation. The reason why we are discussing this issue so much is the current difficult conditions. These hard roads cannot be walked with tired bodies,” Erdoğan added.

Intense security measures were taken around Afyonkarahisar for the camp. Police forces from neighboring provinces reinforced security in Afyonkarahisar, and all entrance and exit points of the city hosted check points manned by police and gendarmerie forces.