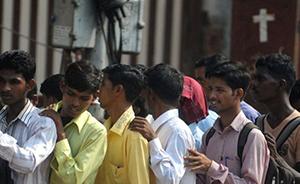 On the campaign trail in 2013, Narendra Modi told Indians that his party would create 10 million jobs if it came to power.

A year later, his BJP swept to power in Delhi with a resounding majority. This January, India’s Economic Survey hinted that things were not going well, and that employment growth was sluggish. New government data shows that the unemployment rate had risen to 5%, up from 4.9% in 2013-14, the year before Mr Modi came to power.

The picture may be actually a lot bleaker. A recent study by economist Vinoj Abraham, using recent jobs data collected by the labour bureau, reckons employment growth in India has slowed down drastically between 2012 and 2016.

What is more worrying, according to his study, is there has been an absolute decline in employment – drying up of existing jobs – between 2013-14 and 2015-16, possibly for the first time in independent India.

Dr Abraham believes that existing jobs may have been drying up in India for a while now. Jobs in farming where nearly half of Indians are engaged for their livelihood – too many people cultivating too little land – are disappearing. Successive droughts and unremunerative prices have pushed people out of farms to seek jobs in construction and rural manufacturing. A McKinsey Global Institute study says farm jobs had reduced by 26 million between 2011 and 2015.

But a slowdown in growth – GDP growth has been falling for six consecutive quarters and hit a three year-low of 5.7% during April-June – triggered in part by a controversial cash ban last year and July’s imposition of a sweeping but clunky Goods and Services tax that has adversely affected labour-absorbing sectors like farming, construction and private businesses, hitting jobs further.

Hiring in more than 120 companies – metal, capital goods, retail, power, construction and consumer goods – has fallen, according to an analysis by The Indian Express. This, a top HR executive told the newspaper, “reflects upon the lack of expansion plans and near-term growth expectation of these companies”.

India’s Economic Survey says creating jobs is India’s “central challenge”. More than 12 million Indians will be entering the labour market and looking for jobs every year until 2030. Some 26 million Indians – roughly a population equal to Australia’s – already are looking for regular work.

India has a curious jobs problem. Unlike in the West, there are no dole queues, for example, which are a marker of unemployment. Economist Vijay Joshi says poverty and lack of a social security system “ensure that most people have to scratch a living somehow, simply in order to survive”.

Also there are many “openly unemployed people” who are supported by their families. Then there’s a vast amount of underemployment – too many people sharing work that could be done by fewer hands. Many work for long hours with poor returns.

Also, most people – more than 80% of the labour force – work in the sprawling, unorganised or informal industries with poor working conditions, paltry wages and scanty benefits. Very few of these jobs lead to security of income, location or employment. Only 7% of Indians actually work in the formal economy with full benefits, according to estimates.

“The future of employment looks even worse because the labour force is expected to grow rapidly. Around a million new work seekers will enter the labour force every month for the next three decades. As things stand India is well on the way to perpetuating a two-tier economy,” says Dr Joshi, author of India’s Long Road – The Search for Prosperity, an excellent exposition of the economy. (A two-tier economy is one in which one group of workers receive lower wages or employee benefits than the other.)

One way to create more jobs is to pay more attention to labour-intensive industries like garments, apparel and leather, which employ more workers.

But the government appears to have shot itself in the foot by closing abattoirs operating without licences – much of India’s leather factories are in the informal economy – and restricting cow slaughter, leading to a drop in India’s exports of leather goods.

Ruchir Sharma, chief global strategist at Morgan Stanley Investment Management, says India’s continued lack of success in industries manufacturing low-end goods like toys and textiles “may be the single biggest reason why it keeps falling short of China and why the jobs market is so weak”.

Has India already passed up its best chance to create jobs?