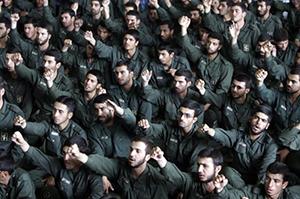 BEIRUT/DUBAI (Reuters) – Iran warned the United States against designating its Revolutionary Guards Corp as a terrorist group and said U.S. regional military bases would be at risk if further sanctions were passed.

The warning came after the White House said on Friday that President Donald Trump would announce new U.S. responses to Iran’s missile tests, support for “terrorism” and cyber operations as part of his new Iran strategy.

“As we’ve announced in the past, if America’s new law for sanctions is passed, this country will have to move their regional bases outside the 2,000 km range of Iran’s missiles,” Guards’ commander Mohammad Ali Jafari said, according to state media.

Jafari also said that additional sanctions would end the chances for future dialogue with the United States, according to state media, and issued a stark warning to American troops.

The Revolutionary Guards (IRGC) are Iran’s most powerful internal and external security force. The Quds Force, the IRGC’s foreign espionage and paramilitary wing, and individuals and entities associated with the IRGC are on the US list of foreign terrorist organizations, but the organization as a whole is not.

Iran sees the Sunni Muslim militants of Islamic State as an existential threat to the Islamic Republic where the majority of the population are Shi‘ites.

On June 7, Islamic State claimed an attack on Tehran’s parliament and the mausoleum of Ayatollah Ruhollah Khomeini, the founder of the Islamic Republic, killing 18 people. The Guards fired missiles at Islamic State bases in Syria on June 18 in response.

Guards commanders have framed their military involvement in Iraq and Syria, where they are fighting to support the government of President Bashar al-Assad, as a fight against Islamic State.

Dozens of members of the Guards, including senior commanders, have been killed in Syria and Iraq.

The website for state TV reported Jafari as adding that the United States was mistaken if it thought it could pressure Iran into negotiating on regional issues.

Jafari also said that Tehran would ramp up its defense capabilities, including its missile program, if the U.S. undermined a nuclear deal between Iran and Western powers.

Under the 2015 deal, Iran agreed to limit its disputed nuclear program in return for the easing of economic sanctions.

However, Trump is expected to announce soon that he will decertify the deal, a senior administration official has said, in a step that potentially could cause the accord to unravel.

“The Americans should know that the Trump government’s stupid behavior with the nuclear deal will be used by the Islamic Republic as an opportunity to move ahead with its missile, regional and conventional defense program,” Jafari said, according to state media.

The prospect of Washington backtracking on the deal has worried some of the U.S. allies that helped negotiate it, especially as the world grapples with another nuclear crisis in the shape of North Korea.

If Trump does not certify that Iran is in compliance, the U.S. Congress will have 60 days to decide whether to reimpose sanctions waived under the deal. U.N. inspectors have verified Iranian compliance with the terms.

The Guards navy was also carrying out a military exercise on Sunday in the Gulf, an area of tension with the U.S. navy in recent months.

More than 110 vessels were involved in the exercise, including some that have rocket and missile capabilities, a state media report quoted a Guards commander as saying.