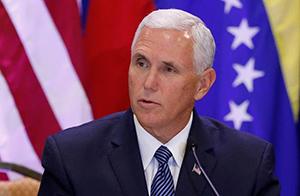 “This is what systemic oppression looks like. A man with power comes to the game, tweets a couple of things out … to thwart our efforts.”

Vice President Mike Pence walked out of Sunday’s NFL game between the Indianapolis Colts and the San Francisco 49ers as several 49ers players knelt in protest during a rendition of the national anthem.

“While everyone is entitled to their own opinions, I don’t think it’s too much to ask NFL players to respect our Flag and our National Anthem,” Pence wrote on Twitter minutes after leaving the game in Indianapolis, Indiana.

Following the example of former San Francisco 49ers quarterback Colin Kaepernick, NFL players around the country have knelt during renditions of the national anthem in order to protest against police brutality and racial injustice directed towards black Americans.

More than a hundred NFL players from several football teams kneeled or held arms in solidarity earlier this month after President Donald Trump called NFL players who kneel during the anthem “sons of bitches.” He later insisted his criticism of the NFL had “nothing” to do with race.

Trump said on Sunday that he asked Pence to leave the stadium in Indianapolis if any players knelt during the national anthem, an extremely likely event given the number of players on the 49ers team who kneel during the anthem before every game.

The president’s revelation suggested the White House orchestrated the walk out on purpose, raising questions about the cost of Pence’s brief trip to Indianapolis. The vice president flew there from Las Vegas, where he visited the victims and families of last week’s horrific shooting. He is now flying back West for a stop in California.

“Wait. This was orchestrated to make a point? That’s not an inexpensive thing to do,” tweeted Sen. Brian Schatz (D-Hawaii) on Sunday.

Many people have commented that Pence’s action came off as publicity stunt, including San Francisco 49ers’ Eric Reid, who was one of the first players to kneel alongside Kaepernick in 2016. Reid told reporters that the three-year-old photo of Pence at a Colts game in 2014 was the last he had heard of the vice president attending a game.

“So this looks like a PR stunt to me,” Reid told a pool of reporters on Sunday. “He knew our team has had the most players protest. He knew that we were probably going to do it again. This is what systemic oppression looks like. A man with power comes to the game, tweets a couple of things out and leaves the game with an attempt to thwart our efforts. Based on the information I have, that’s the assumption I’ve made.”

This is what systemic oppression looks like. A man with power comes to the game, tweets a couple of things out and leaves the game with an attempt to thwart our efforts. Eric Reid, San Franciscos 49ers

Prior to walking out of the game, Pence met with former Colts quarterback Peyton Manning. The retired football star, who also played for the University of Tennessee and has donated to prominent GOP figures, has been floated as a potential candidate to replace Sen. Bob Corker (R-Tenn.). Corker is retiring next year, but Manning has said he has no plans to run for the seat.