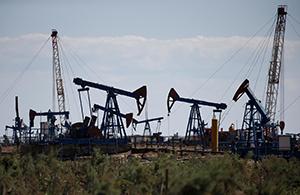 Henning Gloystein
SINGAPORE (Reuters) – Oil prices edged up on Monday, halting a 2 percent slide from Friday, on expectations that Saudi Arabia would continue to restrain its output in order to support prices, and as the amount of rigs drilling for new oil in the United States dipped.

Oil ports, producers and refiners in Louisiana, Mississippi and Alabama, which shut facilities ahead of Hurricane Nate, were planning to reopen on Monday as the storm moved inland, away from most energy infrastructure on the U.S. Gulf Coast.

Brent crude futures LCOc1, the international benchmark for oil prices, were up 8 cents, or 0.14 percent, at $55.70 a barrel.

Oil tumbled by around 2 percent on Friday, with WTI dipping back below $50 per barrel, as concerns of overproduction re-surfaced.

But analysts said on Monday that a Saudi Arabian commitment to support the market by restraining output would prevent crude from falling further.

“We remain fairly confident that the Saudi’s will look to continue to support the oil market, especially until the sale of Aramco,” said Shane Channel, equity and derivatives adviser at ASR Wealth Advisers.

State-owned oil giant Saudi Aramco is planning to float around 5 percent of the firm in an initial public offering (IPO) next year.

A reported cut in the number of U.S. oil rigs drilling for new production provided some price support.