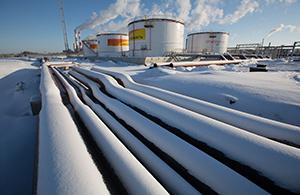 Oil producers are succeeding in re-balancing an oversupplied market, though they may need to take further steps to sustain the recovery into 2018, OPEC Secretary-General Mohammad Barkindo said.

Saudi Arabia and Russia are currently leading consultations between the Organization of Petroleum Exporting Countries and other major suppliers about the future of their agreement to cut oil output, Barkindo said Sunday in New Delhi. The pact expires in March, and oil producers are debating whether to extend it later into the year.

“There is a growing consensus that, number one, the re-balancing process is underway,” he said after meeting with Indian Oil Minister Dharmendra Pradhan. “Number two, to sustain this into next year, some extraordinary measures may have to be taken in order to restore this stability on a sustainable basis going forward.” Barkindo didn’t elaborate on any such measures.

OPEC and allied producers agreed in December to pare output to clear a glut and bolster oil prices. The cuts have helped revive crude, which had fallen to half its 2014 peak. Benchmark Brent crude ended trading on Friday at $55.62 a barrel, down 2.1 percent for the year. OPEC plans to meet on Nov. 30 to assess the market and its production policy.

The 24 producers that agreed to pump less oil are looking forward to welcoming additional participants in the accord, Barkindo said, without identifying any possible newcomers. “At the moment, there is no talk of an extraordinary meeting” beyond the session scheduled for next month in Vienna, he said.

United Arab Emirates Energy Minister Suhail Al Mazrouei said he’s optimistic that the next OPEC meeting will lead to a consensus between the group and its non-OPEC partners that will help balance the market in 2018, according to a tweet. The production cuts have led to a decline in crude inventories and a better balance in the oil market, he said.