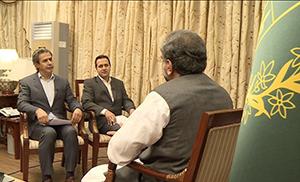 ISLAMABAD: Pakistan will not devalue the rupee or seek help from the International Monetary Fund to address its fiscal challenges, Prime Minister Shahid Khaqan Abbasi told Arab News in an exclusive interview.

“Economies have also slowed down in the Gulf, where most of our remittances used to come from.

“There has been a decline in the reserves but hopefully the last two months show an improving trend and the numbers for September will come in… and we expect to resolve that issue within our resources and not have to resort to the IMF. I don’t think the IMF program is something that we intend to pursue.”

Abbasi conceded that exports were down, but he insisted this was a macroeconomic trend. “Globally there has been a decline in exports,” he said. “We are trying to revive them. The economy is expanding, so the current account challenge is there and we are managing it.

“Imports have gone up. We have a lot of machinery imports. There are some discretionary imports that have gone up, which actually signals growth in the economy because the people have more money to spend on luxury goods.”

Abbasi said Pakistan and its economy were in an “expansion phase,” and were placing their hopes for the future on Chinese investment — particularly CPEC, the China Pakistan Economic Corridor, part of China’s ambitious $1 trillion One Belt One Road initiative.

“If you look at any economy, the basic ingredient is more infrastructure to resolve infrastructural issues and this is a quantum leap in that direction,” he said.

“It’s a massive investment, over $60 billion today. It’s mostly in infrastructure that we badly needed. Our roads, ports, industrial zones … it will open up western channels access to the world. It will help us to move our commerce faster. It will help us develop more industries and help with exports.

Abbasi rejected suggestions that large investments would give China undue influence in Pakistan.

“It’s a two-way relationship,” he said. “They have equity investments here but mostly it is debt or loans of some kind and it is basically focused on certain areas. We do not view it as a threat of any kind.

“Pakistan’s economy has the capacity to repay those loans. They have been targeted very carefully and the economic dividends will pay for more than the loans are worth. So, it’s an economic relationship in that sense.”