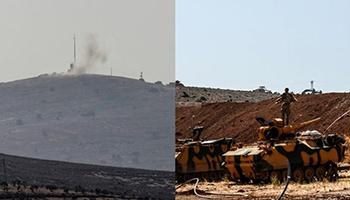 Following the deployment of military units on the Syrian border on Saturday, Turkish military vehicles crossed the border with Syria into Idlib on Sunday, a local resident and a local rebel said, Reuters reported.

According to the report, the vehicles travelled under escort from Tahrir al-Sham, whose fighters accompanied them along the road.

Turkish President Recep Tayyip Erdoğan announced on Saturday that the country had launched a “serious” operation in Idlib province with Turkish-backed Syrian opposition forces. Erdoğan said the FSA was carrying out the operation while Russia was backing it from the air and Turkish soldiers were supporting it from inside Turkish borders.

Prime Minister Binali Yıldırım said on Sunday that Turkey is cooperating with Russia during its operation in Syria’s Idlib: “We will provide security in Idlib.”

Chief of General Staff Gen. Hulusi Akar and other top commanders’ visit to the border province on Saturday was evaluated as a signal of the beginning of the operations in Idlib.

Tahrir al-Sham is spearheaded by the former Nusra Front, which was al-Qaeda’s Syrian branch until last year, when it changed its name and broke formal allegiance to the global movement founded by Osama bin Laden.

Turkey has been one of the biggest supporters of rebels fighting Syrian President Bashar al-Assad during the six-and-a-half-year war, but its focus has moved from ousting him to securing its own border, Reuters noted.