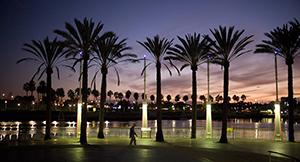 A three-pronged threat, in the form of drought, a Fusarium fungus, and an excessively hungry beetle called the South American palm weevil, is killing the iconic palm trees all across southern California.

It isn’t entirely clear how much longer the trees — a symbol of the Golden State, although not endemic to the region — which are dying from old age and hot weather, will last. Advocacy group TreePeople head Andy Lipkis predicts that it could cost billions of dollars to remove the dead and dying trees over the next 30 years.

Many worry that, without palm trees, California will have difficulty projecting its sunny brand to the world.

“It’ll change the overall aesthetic because palm trees are so distinctive. It’s the look and feel of Los Angeles,” claimed Carol Bornstein, director of the nature gardens at the Natural History Museum of Los Angeles, cited by The Guardian.

“Palms are decorative and iconic, but Los Angeles is facing more and more heatwaves, so it’s important that we plant trees that provide adequate shade to protect people and cool the city down,” Elizabeth Skrzat, City Plans program director, said.

Authorities intend to replace the dying palms with less thirsty — and native — trees that offer more shade. With Los Angeles predicted to be 3 to 5 degrees Fahrenheit warmer by the middle of the 21st century, trees that can withstand hot weather are the go-to first choice of urban arborists.

David Fink, policy director of a nonprofit organization called Climate Resolve, offers that it’s time for Californians — and the rest of the world — to say goodbye to the image of the palm tree as a symbol of the most populated state in the US.

“The iconic association of palm trees with Los Angeles is a positive, but we’re now in a period where we have a better understanding of what’s needed. It makes sense that we replace the palms with trees that have wide expanses of shade and help cool things down,” Fink said, cited by the Guardian.

Not native to the dry and often hot southern California deserts, palms trees were first been planted in the region by Spanish missionaries in the 18th century, part of Catholic observances involving religious symbolism that used the leaves, or fronds, for Palm Sunday and Ash Wednesday rituals.