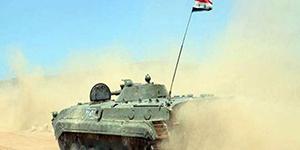 Deir Ezzor, SANA – Army units, in cooperation with the supporting and allied forces, continued to advance from several directions of Deir Ezzor and its countryside.
A military source said that the army units established control over Maratt al-Fouqa town to the east of the Euphrates River and encircled ISIS terrorists in al-Mayadeen city.

SANA reporter in Deir Ezzor pointed out that army units established control over large parts of al-Hattla al-Tahtani village and continued advance towards the area of al-Siayasia Bridge in the eastern side of the Euphrates after fierce clashes with ISIS terrorists where many of the terrorists were either killed or injured.

The military source said the army units also expanded the range of control at the surrounding area of al-Mayadeen city and inside its neighborhoods after establishing control over al-Mattar al-Mahjour, Makef al-Ghanam areas, the Industrial area and a number of the western neighborhoods of the city.

SANA reporter clarified that scores of ISIS terrorists were killed, most of whom suicidal terrorists, in addition to destroying several booby-trapped vehicles used by the terrorists to hinder the advance of the army.
In a similar context, local sources pointed out to the mass escape of ISIS terrorists including leaders of the terrorist organization such as the terrorists Hassan al-Urwa, Rayys al-Fardan and Abdul-Karim Abdul-Hamid Assaf.