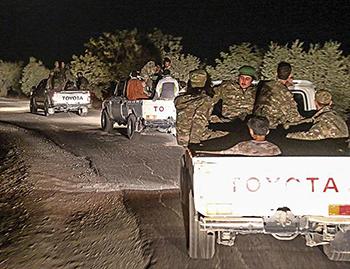 Around seven months after the successful completion of the Euphrates Shield Operation, the Turkish Armed Forces are about to cross the Syrian border once again into Idlib province, this time as part of a trilateral agreement with Russia and Iran order to cement the ongoing truce between the Syrian regime and armed opposition groups.

The unilateral Euphrates Shield Operation, conducted with the Free Syrian Army (FSA), lasted 216 days from August 2016 to March 2017 and resulted in the creation of an area of around 2,000 square kilometers fully cleared of Islamic State of Iraq and the Levant (ISIL) elements.

Around 600 FSA members and 67 TSK personnel were killed in clashes with ISIL during that operation, which in return neutralized around 3,000 jihadists with many more of them fleeing into southern Syria.

The upcoming operation into Idlib, however, seems to be much more risky, given the fact that many parts of the province are under the control of Hayat Tahrir al-Sham, a jihadist umbrella organization that includes former al-Nusra and al-Qaeda linked groups and is believed to have around 20,000 to 30,000 armed militants.

It would not be an exaggeration to suggest that this particular region is one of the most dangerous spots in the whole of Syria, firstly because of the high proportion of armed jihadists groups and secondly because these groups mostly live integrated with civilians, making any military operation particularly difficult.

Although the primary officially announced mandate of the Turkish Armed Forces in Idlib is to observe and report the ongoing truce between the two fighting groups, as part of the Astana Process, the scope of the military action is expected to be expanded to clear the region of jihadists and perhaps also block any future Syrian Kurdish People’s Protection Units (YPG) attempts to grow their area of influence in northern Syria.

The first phase of the military offensive is as announced aiming at implementing the deal reached last month in Astana on the creation of de-escalation zones in Syria. In the Idlib section of this deal, Turkey and Russia will be in the field, with the former in western part of the province and the latter stationed in the east. Although it has been announced that each side will deploy 500 troops to observe the ceasefire, the number of Turkish Armed Forces personnel crossing the border will be twice as much as this. Turkish troops will establish 14 monitoring centers along a 400-kilometer non-linear line in provincial areas but will stay away from Idlib city.

These observers will report to a Joint Turkey-Russia-Iran Coordination Center, which is expected to be established during the next Astana Process meeting probably in late October. Violations of the ceasefire will be reported to this coordination center. According to the Astana Agreement, the mandate of this monitoring mechanism is initially for six months but it will be automatically expanded upon the request of the three guarantor countries.

Protecting civilians and preventing new massive refugee inflows are also among top objectives of Turkey’s new operation. As seen during the Euphrates Shield Operation, this new operation will likely last a number of months.

One of the reasons why this operation is riskier is the fact that these tens of thousands jihadists and groups will not stand idly while Turkey and Russia are increasing their visibility in the region. Russia and Syria have already been bombarding jihadists in and around Idlib, and there is no question that at some point of this operation clearing Hayat Tahrir al-Sham from the region will be inevitable.

It is hard to predict how the Armed Forces will avoid a direct military confrontation with these groups. The agreed rules of engagement as part of Astana deal stipulates use of force against potential threats, apparently a precaution taken for the self-protection of the Turkish troops.

Is Afrin also a target?

President Recep Tayyip Erdoğan’s Oct. 7 statement that Turkey could opt for different initiatives after the Idlib operation starts has been regarded as a sign of a future confrontation against the YPG presence in Afrin canton.

The Euphrates Shield Operation nixed the YPG’s plans to link its Afrin canton with two other cantons east of the Euphrates River. The operation in Idlib will physically squeeze the YPG between Turkish troops to the east, north and west. Turkey has long been urging the YPG to not try to create what it calls a “terror corridor” in northern Syria, and pressure on the YPG is expected to be increased through the Idlib operation.

However, it may well prove to be a great challenge for Turkey to stage a kind of offensive against the YPG, as this group is being protected by both Russia and the United States.