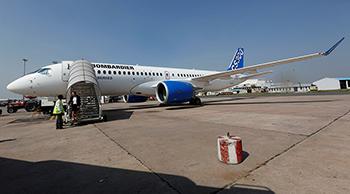 The US Commerce Department has raised the proposed duties on aircraft produced by Canada’s Bombardier to nearly 300 percent over Boeing’s complaints of illegal subsidies and dumping.

The decision falls in line with US President Donald Trump’s “America First” push and further strains the already rattled US trade relations with the UK, where the C-Series jets are made.

It’s a 79.82 percent hike on top of the 219.63 percent announced in late September, which already put some 4,000 Northern Ireland jobs on the line.

The new punishment is an antidumping duty following the preliminary findings that Bombardier sold 75 C-Series jets below cost to Delta Air Lines Inc in 2016, while the previous came over subsidies complaints. Boeing’s complaint initially sought only 80 percent.

The punitive tariffs will now have to be approved by the US International Trade Commission (ITC) early next year. To achieve that, Boeing will have to prove to ITC it was harmed by Bombardier’s sales. However, Boeing didn’t compete for Delta’s order with any of its own aircraft.

“Boeing had the chance to compete with Bombardier for Delta’s purchase of aircraft in this size range, but Boeing’s only proposed alternative to the CS100 was to offer Delta used Brazilian-made regional jets,” Delta said in an e-mail statement cited by Bloomberg, explaining that Boeing simply doesn’t produce aircraft of the size range it wanted.

Canada has accused Boeing of “manipulating the US trade remedy system“ to eliminate competition, and vowed to keep raising concerns with the US, Foreign Minister Chrystia Freeland said in a statement.

Both Canada and the UK have already threatened to stop buying Boeing military equipment.