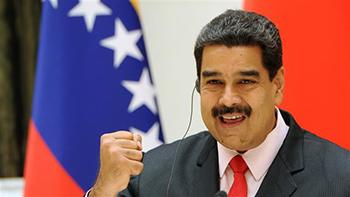 Following a tour of Russia, Turkey and Belarus, Venezuelan President Nicolas Maduro says his country is receiving support from a “new world” thanks to the sanctions ordered by his US counterpart, Donald Trump, against Caracas.

Speaking on weekly program on state TV on Sunday, Maduro said he has found out that his country “is not alone and has the sympathy, solidarity and support of the whole world.”

“A whole new world is opening up for Venezuela thanks to Trump’s sanctions,” Maduro said.

He explained that due to US financial sanctions on his country and government, several countries, including Russia, are ready to strengthen economic, industrial, financial and political cooperation with Caracas.

“It’s an honor that the head of the empire [US] mentions me every day,” said the president. “That means I‘m doing something right!”

Accusing Venezuela of becoming “a corrupt and repressive dictatorship,” Trump has widened individual sanctions on top officials, including Maduro, and also prohibited new debt dealings with his government.

“Donald Trump has become the head of the Venezuelan opposition,” Maduro added. “He has made me famous around the world. Every time he mentions me, they love me more.”

Maduro’s three-nation tour came to an end on the weekend.

During his trip to Moscow last week, Maduro said he discussed with Russian President Vladimir Putin the possibility of trading Venezuelan oil in Russian rubles.

Maduro also signed “a set of agreements” with Turkey during his stay in Ankara, adding that “we are opening up very important roads with Turkey.”

In his visit to Belarus, Maduro discussed plans with his counterpart Aleksandr Lukashenko to boost military cooperation. He said that “cooperation in the military sphere has been very successful and we need to expand it.”

Upon arriving home, Maduro hailed his international tour as a “total success,” saying he was touring the “new world to which Venezuela belongs to, a multi-polar world that respects us.”

The socialist president has repeatedly accused the Venezuelan opposition of planning a “coup d’état” with the help of Washington.

Maduro has slammed the US and its regional allies for fueling the recent political tensions gripping Venezuela by openly siding with the opposition.