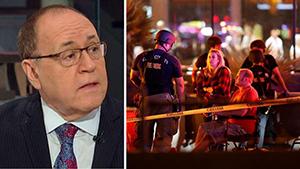 Stephen Paddock, the 64-year-old mass murderer who opened fire on a crowd of thousands of concert goers in Las Vegas, injuring hundreds and killing 59, is dead of suicide, meaning a psychiatric examination cannot be conducted and a direct determination as to whether he was psychotic at the time of the shootings cannot be made. Anything short of such an examination is necessarily speculative.

Law enforcement officers trying to put together a picture of who this man was and what his motive may have been, have been speaking with people who knew him, including his girlfriend Marilou Danley. She has denied knowing that anything untoward was going on.

The fact is the vast majority of those diagnosed with psychiatric disorders do NOT commit violent acts, and only about four percent of the violence in the U.S. can be attributed to those diagnosed with mental illness. Which is not to say that severe mental illness doesn’t play a role in many mass shootings. “Reports suggest that up to 60 percent of perpetrators of mass shootings in the United States since 1970 displayed symptoms including acute paranoia, delusions, and depression before committing their crimes” according to a study from Vanderbilt University published in the American Journal of Public Health in 2015.

Anything short of such an examination is necessarily speculative. The fact is the vast majority of those diagnosed with psychiatric disorders do NOT commit violent acts, and only about four percent of the violence in the U.S. can be attributed to those diagnosed with mental illness.

Psychosis may take many forms. A psychotic person may hear voices or believe they are being observed. He or she may develop a self-referring delusional belief system. Clues such as loss of personal hygiene, social withdrawal, anger and irritability or sleeplessness can often point to developing psychosis. At this point it is not possible to know whether these symptoms applied in Paddock’s case. Reckless gambling and thrill-seeking can also be signs of a psychiatric disorder as well.

Paddock was reportedly given a prescription for diazepam (generic Valium) months before the shootings. This has also led to speculation about his mental condition, but the fact is that it could have been prescribed for everything from mild anxiety to muscle spasms. Or it could be a clue that Paddock was suffering from more severe anxiety that was being under-appreciated, but we simply don’t know that.

What we do now know is that Paddock was planning this crime for a long time, that he had an escape plan, and that he targeted fuel tanks during the shooting spree. This careful planning and execution does not mean rationality, in fact it may well have been part of a delusional system of thought which characterized a psychotic disorder. What is lacking so far is motive, though a clear lack of empathy for the suffering he would cause appears to be evident. Shooting into a crowd of strangers makes it easier to depersonalize victims.

With mass public shootings on the rise, the need to protect the public from seemingly random crimes is increasing. But how to screen? How to better inform a storekeeper or a girlfriend or even the person themselves that they may be developing a destabilizing condition?

Stigma against people with severe mental illness is increasing, while at the same time, violent acts committed by psychotic people out of touch with reality is also increasing. The misperception that the mentally ill are violent – when the vast majority of them are not – also fuels the stigma. In fact, treating mental illness early actually decreases the risk of violence.

The Vegas massacre may be another wakeup call to finally de-stigmatize severe mental illness and to look for clues to diagnose it and treat it earlier. Of course we can’t say for sure that Paddock was mentally ill or even that he acted alone. But could Paddock’s Valium prescription have represented a clue or even a cry for help that was overlooked?

It is not possible to turn back the clock, but going forward, it is helpful for physicians to screen their patients more and look below the surface for masked symptoms of instability. Whether Paddock was overtly psychotic and detached from reality or simply a sociopath with a warped sense of right and wrong, one thing’s for certain – anxiety and guns are not a good combination.

Marc Siegel, M.D. is a professor of medicine and medical director of Doctor Radio at NYU Langone Medical Center. He has been a medical analyst and reporter for Fox News since 2008.

Joining the Wolves Erdogan’s Pact with the Ultra-Nationalists