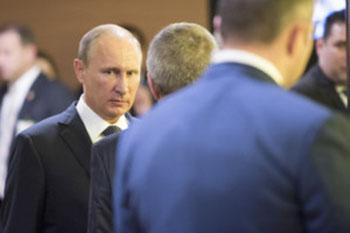 Official Washington is so obsessed with the hyped Russia-gate allegations that it isn’t picking up on dire warnings from Russia that continued U.S. military interference in Syria won’t be tolerated, as Gilbert Doctorow notes.

From time to time, the Kremlin uses the Sunday evening weekly news wrap-up program of Dmitry Kiselyov on state television, channel Rossiya-1, to send blunt and public warnings to Washington without diplomatic niceties. Last night was one such case and we must hope that the intended audience within the Beltway can put aside all its distractions about Russia-gate long enough to read a real message from Moscow.

The last such message came in the week following President Trump’s April 6 decision to launch 59 Tomahawk missiles at a Syrian air base to punish the Syrian government for an alleged but disputed chemical attack on a village in Idlib province. TV host Kiselyov used his airtime to spell out Russia’s disdainful response, which he characterized as unprecedented in scope and seriousness.

It was essential to put all the elements of the warning together in one place, as he did, because the Pentagon sought to downplay the elements in isolation, such as Russia’s installation of the Iskander nuclear potential missiles in Kaliningrad, a Russian city on the Baltic Sea surrounded by Poland and Lithuania; or the abrogation of the deconfliction agreement relating to air space over Syria; or the dispatch of still more Russian vessels to the Eastern Mediterranean equipped to sink U.S. Navy ships.

While U.S. generals were saying that the Russians didn’t really mean it, Kiselyov put the whole picture on the screen: an ultimatum to Washington to back off or be prepared for war.

A still earlier message of this kind to Washington aired on the Kiselyov news show in the week following the supposedly accidental Sept. 17, 2016 bombing by U.S. and allied warplanes against Syrian army positions inside the encircled eastern town of Deir Ezzor, which killed more than 80 Syrian soldiers and prepared the way for a renewed offensive by the Islamic State. That bombing scuttled the agreement on a Syrian cease-fire concluded with the approval of President Obama less than a week earlier by Russian Foreign Minister Sergei Lavrov and U.S. Secretary of State John Kerry after a 14-hour negotiating session.

Lavrov was shown on the Kiselyov program openly accusing U.S. Secretary of Defense Ashton Carter of directing “friendly fire” against Kerry and of dangerous insubordination to his boss, the U.S. President, which put in question any possibility of reaching agreements with the Americans on anything.

That last question about who’s in charge in Washington has now re-emerged in the program that Kiselyov presented on Sunday evening. The Americans were identified as the “main obstacle” to the mopping up operation in Syria, at a time when Kiselyov indicated that people could finally see “the light at the end of the tunnel” for the horrific six-year conflict with more than 90 percent Syrian territory now back under government control.

The core of the accusation is that the United States is secretly aiding the Islamist terror groups at the center of the remaining resistance to President Bashar al-Assad’s regime: supplying the terror groups with weapons, helping them to move around, removing them from hostile fire, and giving them the findings of aerial reconnaissance, maps of where Syrian government forces are operating and even the locations of Russian military detachments.

Things have gotten to the point where the Russians feel that it is not the military capability of the Islamic State that stands in the way of routing the remaining terrorists from Syrian territory but this American assistance to the terrorists. This analysis, said Kiselyov, is not his own idea: it is the official position of the Russian Ministry of Defense as issued through its spokesman this week, Igor Konashenkov.

Kiselyov added: “The Americans deny everything. But the RF Ministry of Defense does not believe their words, relying instead on facts. We recall in the past week how part of the main road connecting Palmyra and Deir Ezzor was taken over by the fanatics. This is the main artery supplying the Syrian forces leading the offensive from Deir Ezzor against the remaining forces of the terrorists in Syria. De facto this was an attack in the rear. This was planned and facilitated by the Americans. In parallel, on 28 September a large group of terrorists numbering about 300 men left the area of the American base in al-Tanf at the Jordanian border. In this area there is a refugee camp numbering tens of thousands.”

According to Kiselyov, the Americans have cut off the refugee camp, not allowing in United Nations or other humanitarian relief convoys, so as to use the camp as cover, a human shield, for the Islamic State fighters whom the U.S. military is supporting.

According to the warning from Russian defense spokesman Konashenkov, if the U.S. forces see these attacks by mobile units of terrorists whom the Americans are assisting as “unforeseen random events,” then Russian armed forces in Syria are prepared to totally destroy all such “random events” directed against the zone under their control.

Kiselyov asked why is this American behavior happening and whether President Trump made this decision. But the question is rhetorical. Though it may seem “amazing,” Kiselyov suggested that it appears Trump was not a party to this behavior, that it more likely resulted from what the TV host called sloppy management when the military gets out from under political control.

On the territory of Syria, Kiselyov said, “they start wandering around quite on their own” and “flirting” with the terrorist groups.

Throughout the six-year war, the United States and its allies – including Turkey, Saudi Arabia, the Gulf States, Jordan and Israel – have provided support for Islamist militants and other rebels who have fought in close coordination with and often shared sophisticated U.S. weapons with Al Qaeda’s Syrian affiliate, Nusra Front, and at times Al Qaeda’s spinoff, the Islamic State.

However, whatever the U.S. intentions may be, said Kiselyov, the result is extremely unpleasant both for Russia and for the American leadership as its generals are being pushed toward adventurism.

Konashenkov characterized the area in Syria under American control near the Jordanian border as a “black hole” that is 100 kilometers long. From this “black hole,” the terrorists come out to stage their attacks on Syrian troops and against the peaceful civilian population.

The Sunday program’s feature segment then shifted to a calmer note with the insistence that Russian President Vladimir Putin remains confident in the victory over the terrorists regardless of who is aiding them. To demonstrate this confidence, the show presented footage of Putin’s response to questions put to him at the Energy Forum in Moscow at mid-week. Putin said, “in the end, we all [presumably including the Americans] have common interests in securing Syria and the region against terrorists and that will bring us together for cooperative action.”

In the meantime, however, videos showed the results of Russian air activity in Syria this past week, including more than 400 sorties of Russian planes based in Syria, plus SU-134 and SU-135 bombers arriving from Russian territory that killed a dozen or more terrorist leaders together with 50 security personnel and seriously injured a top official who lost an arm and sank into a coma.

Russian air attacks destroyed the terrorists’ main underground weapons caches amounting to 1,000 tons, according to the report, and an attack by Kalibr cruise missiles launched from submarines in the Mediterranean destroyed Islamic State command installations and vehicles as well as weapons supplies. This attack cleared the way for Syrian troops to begin the liberation of the town of Meyadin.

The program left the dots unconnected, but the Russian threat is clear: Moscow will use its air power to eliminate all forces standing in the way of complete victory including U.S. forces on the ground near the Jordanian border.

The same news round-up had another segment that relates in less direct fashion to the Russian success in Syria: a state visit to Russia by the king of Saudi Arabia, the first in the two countries’ 90-plus years of diplomatic relations. And it was not a simple affair.

Salman bin Abdulaziz Al Saud brought with him a contingent of 1,000 people, including business leaders, ministry officials and senior military officers. They came with a reported 100 tons of baggage, including favorite carpets and other accouterments of the royal lifestyle.

All aspects of this visit were impressive, including the signing of contracts and letters of intent for multi-billion-dollar joint investments in industrial projects in both countries, possible Saudi purchases of Russian Liquefied Natural Gas from yet another mega-project seeking financing and multi-billion dollar military procurement, said to include the latest S-400 air defense system that Russia agreed to supply to Turkey a few weeks ago in exchange for a $2.5 billion down-payment and which Turkey accepted gratefully over NATO objections.

Putin quipped to the moderator of the Moscow Energy Forum, also held during the past week, that nothing is forever, not even the U.S. hold on the Saudis.

Kiselyov placed the visit in the context of Russian foreign policy in the region generally. Putin, he said, is pursuing a policy of seeking peaceful harmony in the Near East that takes into account the balance of interests of all countries in the region, a policy which is paying off: Russia is now the only country in the world to have good relations with Saudi Arabia, Iran, Israel, Turkey, Iraq and, of course, Syria.

From both segments it would appear that U.S. longstanding domination of the region is unraveling.