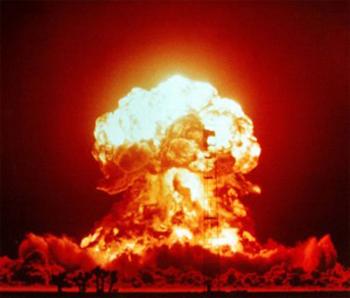 In contrast to past Nobel Peace Prizes often going to war-makers – from Henry Kissinger to Barack Obama – this year’s award went to a global campaign for the elimination of nuclear weapons, as ex-CIA analyst Elizabeth Murray observes.

I take delight in the news that the International Campaign to Abolish Nuclear Weapons has won this year’s Nobel Peace Prize. A coalition of non-governmental organizations in 100 countries, ICAN helped draft the Treaty on the Prohibition of Nuclear Weapons that was ratified by the United Nations on July 7 with the approval of 122 nations, meaning that fully two-thirds of the world’s nation-states have voted to banish nuclear weapons, the most destructive weapon ever created, capable of erasing humanity from the face of the earth.

Predictably, the United States and other nuclear-armed nations have so far declined to sign the treaty. But as one nuclear resistance advocate put it: “You cannot wait for the smokers to institute a smoking ban.”

I am a member-in-residence of the Ground Zero Center for Nonviolent Action, a Poulsbo, Washington-based nuclear resistance group that has affiliated with ICAN. Here at the Ground Zero Center, we share a border fence with Naval Base Kitsap-Bangor – home to eight Trident nuclear submarines and arguably the largest concentration of deployed nuclear weapons in the world, which former Seattle Archbishop and nuclear resister Raymond Hunthausen famously called “the Auschwitz of Puget Sound.”

Indeed, Pentagon Papers whistleblower Daniel Ellsberg, a former nuclear war planner who has just written a book about the nuclear threat in the Trump era, has referred to nuclear weapons as a “movable Holocaust.”

In an escalating war of words with North Korean leader Kim Jong Un, President Donald Trump – who commands what is indisputably the world’s most powerful nuclear arsenal – recently threatened to “totally destroy” North Korea. He subsequently rattled the world with his breathlessly reckless statement that “only one thing will work” with North Korea, which hints darkly at a nuclear confrontation. Such dangerous rhetoric has raised tensions as well as the chances that nuclear conflict could indeed occur, whether deliberate or accidental.

In accepting the Nobel Peace Prize, ICAN stated: “All nations should reject these [nuclear] weapons completely – before they are ever used again. This is a time of great global tension, when fiery rhetoric could all too easily lead us, inexorably, to unspeakable horror.”

Despite a prohibition on the targeting of civilians under the laws of war, ICAN noted that “nuclear weapons are meant to target civilians; they’re meant to wipe out entire cities.” This is unacceptable, ICAN said, adding: “Nuclear weapons no longer get a pass.”

Some governments hold the belief that nuclear weapons are a legitimate and essential source of security. Such a mindset is not only misguided but dangerous, since it incites other nations to proliferate their nuclear arsenal, and undermines diplomatic negotiations that could lead to disarmament. The United States could lead by example, but does the opposite.

“The spectre of nuclear conflict looms large once more,” ICAN warned in its acceptance statement. “If ever there were a moment for nations to declare their unequivocal opposition to nuclear weapons, that moment is now.”

But at a time when most of the world’s nations are pursuing the abolition of nuclear weapons, the U.S. government is moving ahead with its trillion-dollar rebuild of the entire U.S. nuclear weapons triad. The program will include a new fleet of nuclear-armed submarines, many of which will be stationed at the Kitsap-Bangor Naval Base.

Can the U.S. step back from the brink of nuclear destruction of the planet? The U.S. nuclear upgrade is certainly giving war every chance. ICAN’s selection as the Nobel Peace Prize winner provides a unique opportunity to raise the profile of the overwhelming desire of the world’s nations for nuclear disarmament.

As the late President John F. Kennedy stated in his 1961 inaugural address: “To those nations who would make themselves our adversary, we offer not a pledge but a request: that both sides begin anew the quest for peace, before the dark powers of destruction unleashed by science engulf all humanity in planned or accidental self-destruction.”