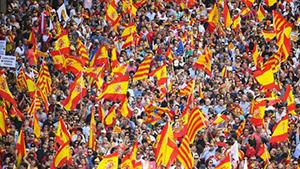 Catalan President Carles Puigdemont is facing growing pressure to drop plans to break from Spain ahead of a key address to the regional parliament.

There has been speculation that he could announce a unilateral declaration of independence following a disputed referendum.

France and Germany have both expressed support for a united Spain.

The mayor of Barcelona urged Mr Puigdemont and Spanish PM Mariano Rajoy to “de-escalate” the crisis.

Ahead of Mr Puigdemont’s speech to the Catalan parliament on Tuesday evening, Mayor Ada Colau urged him not to declare independence, and also called on Mr Rajoy to rule out direct control from Madrid.

“I ask them not to take any decision that might blow up the possibility of any space for dialogue and mediation,” said Ms Colau.

“That is the most courageous act they could do now.”

The leader of Spain’s Socialist opposition party, Pedro Sanchez – who is also opposed to independence – weighed into the row.

He told reporters in Barcelona that he would back action from the Madrid government “in the face of any attempt to break social harmony” if independence was declared unilaterally.

The Spanish government has threatened to suspend the autonomy of the north-eastern region.

Economic pressure is also increasing on Catalan separatist leaders with more major companies moving head offices away from the region.

Never before has the world watched Catalonia’s regional parliament so closely. This evening, with probably large numbers of police and protesters outside, the leader of the devolved government is due to address Catalan MPs. Carles Puigdemont plans to present his government’s results of the disputed referendum, which Madrid declared illegal.

Since then, Mr Puigdemont has said on several occasions that he will declare independence, despite fierce opposition across Spain and criticism from European governments.

Now, will he make good his threat? Or will he announce a more nuanced strategy, hoping still for a proper, recognised referendum one day? Under pressure to act, the Spanish government has made stark warnings, too. If the order comes, thousands of Spanish national police, here in Barcelona, could intervene.

Publishing company Grupo Planeta said it would also move from Barcelona to Madrid if there was a declaration of independence.

Major lenders Caixabank and Sabadell have already announced they are moving offices out of the region.

Catalonia is one of Spain’s wealthiest regions, accounting for a quarter of the country’s exports.

A spokesman for German Chancellor Angela Merkel said on Monday that she had “affirmed her backing for the unity of Spain” in a phone call with Mr Rajoy.

French government minister Nathalie Loiseau said that if there was a declaration of independence “it would not be recognised”.

The European Union has made it clear that should Catalonia split from Spain, the region would cease to be part of the EU.

Catalonia’s parliament had been due to meet on Monday with the expectation that it would endorse the declaration of independence, based on the majority Yes vote on 1 October.

However, the session was blocked by the Spanish Constitutional Court, which had also sought to stop the referendum itself.

There is intense speculation as to what Mr Puigdemont may say when he addresses parliament.

He could ask the parliament to declare independence on the basis of the referendum law it passed last month, which in turn could lead the Spanish government to suspend devolution, acting under Article 155 of the constitution.

The BBC understands that whatever Mr Puigdemont says, his statement will trigger the 48-hour period within which MPs need to declare independence, according to Catalan law.

But an MP from Mr Puigdemont’s party told the BBC on Sunday that the current plan was to stop short of such a unilateral declaration and make a “symbolic statement” instead.

There have been huge rallies in Barcelona, both for and against secession. At least 350,000 people joined a pro-unity protest on Sunday.

Final results from the referendum suggest 43% of Catalan voters turned out and 90% of them backed independence. However, “No” voters largely boycotted the ballot.