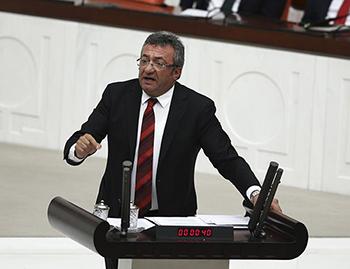 An Istanbul appeals court on Oct. 9 ordered a retrial for main opposition Republican People’s Party (CHP) Deputy Enis Berberoğlu, reversing a previous ruling by a local court that ordered 25 years of imprisonment in the case of the Turkey’s National Intelligence Organization (MİT) trucks bound for Syria. Berberoğlu has been jailed for four months on espionage charges.

An Istanbul regional court reversed the ruling of the 25-year prison term for Berberoğlu. The Istanbul 14th High Criminal Court had ordered the prison sentence on charges of “revealing secret information in terms of the security of the state or for its domestic and external political benefits with political or military espionage purposes.”

The appeals court ruling came after Berberoğlu’s lawyers had issued an application to the court for an examination into the case.

Accordingly, Berberoğlu will be retried in the case as his criminal file will also be sent to the previous court for review.

However, the appeals court ordered the continuation of the CHP deputy’s arrest, citing the status of current evidence and his potential to escape while also ruling out any probation.

Meanwhile, his lawyers stated they would demand Berberoğlu’s release after the appeals court ruling.

Separately, CHP spokesperson Bülent Tezcan also called the appeals court ruling a “partake of lesson” that had revealed the party’s “rightfulness” on the issue but said the order for the continuation of his arrest was a “deficiency.”

Berberoğlu was sentenced to 25 years in prison on June 14 for allegedly “leaking state secrets” in the MİT trucks case, in which he is accused of providing daily Cumhuriyet with a video purporting to show the intelligence agency trucking weapons allegedly for Syria.

The Istanbul 14th High Criminal Court had ruled that Berberoğlu, the first CHP lawmaker to be given prison time, had “knowingly helped a terror organization” by providing “state secrets” to the media when gendarmerie forces halted the trucks near the Syrian border on Jan. 19, 2014.

His arrest had immediately prompted CHP party leader Kemal Kılıçdaroğlu to launch a 25-day “justice march” from Ankara to Istanbul one day later.

Kılıçdaroğlu’s march had initially been planned to end in front of Maltepe Prison, where Berberoğlu is currently held, but the party later changed plans and held a massive rally in the district on July 9 instead.