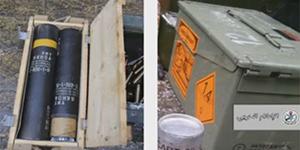 Damascus, SANA – The Defense Ministry published new evidence of the involvement of the Israeli occupation and the US-led international alliance in supporting, funding, and providing weapons and ammo to terrorist organizations in Syria.

In a report published on Monday, the Defense Ministry said that since the start of the war on Syria, large amounts of Western-made weapons and ammo were seized in different areas in Syria, and American-made weapons were sighted in the possession of terrorists from ISIS and other terror organizations.

The Ministry said that these weapons are procured through various channels and via companies in Eastern Europe affiliated with US and NATO intelligence agencies, and then they are delivered to Turkey or Saudi Arabia via European ports of the American Ramstein Air Base in Germany.

The report pointed out that terrorist from ISIS and Jabhet al-Nusra were provided with rockets, rifles, machineguns, anti-air weapons, and even tanks in exchange for oil that the terrorists steal from wells in Syria and Iraq.

After the liberation of east Aleppo and areas in the provinces of Homs, Hama, Aleppo, and Deir Ezzor from ISIS and al-Nusra, the Syrian Arab Army found weapons made in Bulgaria and Eastern European countries that the terrorists left behind, the Ministry added.

The report also revealed that the Israeli occupation provided various types of weapons to Jabhat al-Nusra and other terror groups in Syria.

The report said that other channels used to army terrorists in Syria include the support programs for the so-called “moderate opposition” which were organized by the administration of former US President Barack Obama, and these weapons ended up in the hands of terrorists as evidenced by videos and photos that popped up on social media showing al-Nusra terrorists using American-made TOW anti-tank rockets.

The Ministry noted that all the fighters of the so-called “free army” who were trained and armed by the Americans in Turkey in September 2015 later pledged allegiance to Jabhat al-Nusra after entering Syria, and the same thing happened with the fighters trained in Jordan who ended up joining ISIS, and it’s worth mentioning that large numbers from “Nour Eddin al-Zinki Movement” which was supported by the US ended up joining al-Nusra.

The report stressed that the claims made by the administration of current US President Donald Trump about stopping the support for the so-called free army are just an attempt to deceive the international community.

The Ministry’s report pointed out to the statement made by Pentagon spokesman Major Adrian Rankin-Galloway on May 31st when he confirmed that the US began providing weapons to the QSD under the pretext of helping defeat ISIS, and according to Foreign Policy magazine, these weapons are valued at over USD 2 billion.

Information available to the Defense Ministry shows that between June 5th and September 15th 2017, the US sent 1421 trucks loaded with military aid to QSD groups, which was confirmed by the Pentagon spokesman who said that these shipments included 12,000 AK-46 assault rifles, 6,000 machineguns, 3,500 mid-sized machineguns, 3,000 RPG launchers, 1,000 AT4 launchers, 235 mortar launchers, 100 sniper rifles, and 450 night-vision scopes, all of which were sent to areas controlled by the QSD.

The report notes that the weapons include Soviet models that were likely exported to the states of the Warsaw Pact in the past and were later purchased from these states, with the Ministry stressing that despite claims about these weapons having been sent to help fight ISIS. They end up falling in the hands of terrorists because of the lack of scrutiny about who is receiving them, and this is intentional and seeks to escalate the war in Syria, in addition to violating the UN’s Arms Trade Treaty of 2014 which states that it’s illegal to export weapons if there is a likelihood of them falling into the hands of terrorists.

The report went on to say that Item 11 of the Arms Trade Treaty stipulates for monitoring the movement of weapons to the intended recipient and requires taking measures to prevent them from being misplaced.

The Ministry stressed that the states selling weapons to Saudi Arabia, Qatar, Turkey, Jordan, and the Israeli occupation do not carry out evaluations of the potential risks mentioned in Item 7 of the Treaty about weapons falling into the hands of terrorists, therefore they are violating international law.

The report pointed out that the weapons purchased by Saudi Arabia from Central and Eastern European states are largely incompatible with the Saudi armament program and equipment, indicating that Saudi Arabia isn’t actual the final user of these weapons; rather they go to terrorists in Syria.

The Ministry mentioned cases of finding Bulgarian weapons in areas liberated from ISIS, meaning that these terrorists are using Bulgarian weapons bought by the US, similar to what happened in Afghanistan in the 1980s when the US and Saudi Arabia sent weapons to the Pakistani intelligence which ended up with Al Qaeda and Taliban.

The report moved on to recent events in the Eastern Ghouta area in Damascus Countryside and the eastern neighborhoods of Damascus, where fragments with serial numbers were found of foreign-made munitions fired by terrorists at residential areas in Damascus and its suburbs.

The Ministry said that after Obama’s administration lifted the ban on providing lethal weapons to terrorists, Saudi Arabia bought 15,000 TOW anti-tank rockets from America at a cost of USD 1 billion, and these weapons showed up in Syria in 2014 where terrorists used them against the Syrian Army.

The Ministry added that these large shipments of weapons were accompanied by the arrival of 20,000 foreign fighters from Turkey, which helped make Jabhat al-Nusra one of the strongest groups fighting the Syrian Army.

Despite the ban on exporting weapons to Syria, over two million CITY 4000 rockets came from Bulgaria via Saudi Arabia and ended up in the hands of terrorists in Aleppo, the report added.

The report says that in December 19th 2016, while demining al-Sakhour area in eastern Aleppo, various types of ammo was found including US-made ammo such as 60mm mortar rounds and grenades fired by launcher attachments for rifles.

The Ministry concluded the report by saying that geographic proximity and the lack of oversight of exports allowed some states to benefit from arms trade, and in most cases this was done with the help of the US, which assisted its allies in sending weapons to terrorists and provided high-tech weapons to escalate the situation in Syria, weapons which ended up in the hands of al-Nusra and ISIS, therefore Washington is responsible for the expansion of these terror organizations in Syria. 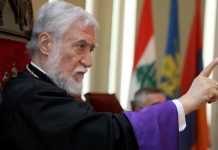