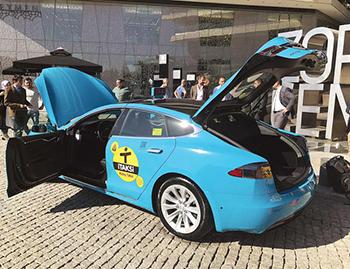 Some 200 electric taxis will be on Istanbul roads by the end this year, Istanbul Chamber of Taxi Drivers (İTEO) head Yahya Uğur was quoted as saying by Turkey’s state-run Anadolu Agency on Oct. 9.

“We have started with one taxi for now. Tomorrow one more will hit the road. By the end of this year, the number will have reached 200,” Uğur said at a publicity event introducing the new taxis in front of Istanbul’s Zorlu Center.

The electric taxis are turquoise blue and will serve Istanbulites with an average fee around 15 percent higher than other taxis.

“Effectively this means that our customers will pay 23 Turkish Liras to take a journey in a turquoise blue taxi compared to the 20 liras that they would pay for a regular taxi,” said Uğur.

“I don’t think our customers will mind about paying 15 percent more for vehicles of this higher quality. A very pleasant taxi system is coming that is application-supported, with a camera system for security,” he added.

Uğur also touched on the dispute in Istanbul between traditional licensed taxi drivers and Uber drivers, amid complaints that the ride-hailing app has undercut taxi service providers in Turkey’s biggest city.

“In the new Turkey, there is a need for new taxis. This is how we will block off pirate taxi cabs, Uber, and other such formations. This will also increase our customers’ comfort and security and boost our service quality,” he said, also touching on the situation of taxi drivers who want to use the new electric cabs.

“No drivers will be automatically provided with a new vehicle or a new license. This is a system that taxi owners can choose based on their own budgets, the region where they are located, or where they work. This is a new era for Istanbul,” Uğur said.

Unlike the case for existing yellow cabs, the new turquoise taxis will be able work in every region of Istanbul, he noted.

“For example, in [the district of] Beylikdüzü, there are red taxis at the moment and yellow cabs do not even take business here. But there will be no such limit for turquoise taxis. They will be able to take customers from and to every area in Istanbul,” Uğur said.