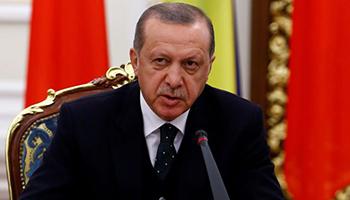 Turkish President Recep Tayyip Erdoğan on Monday commented on a visa crisis with the US that erupted following the arrest of a US Consulate General staff member on Oct. 4, saying the decision is “saddening.”

Speaking during a press conference with his Ukrainian counterpart, Petro Poroshenko, in Kyiv on Monday, Erdoğan said: “Above all, this decision is saddening. The fact that the ambassador in Ankara took such a decision and implemented it is saddening.”

However, Erdoğan backed the decision to arrest Metin Topuz, a member of the US Consulate General in İstanbul staff, on Oct. 4 on espionage charges and alleged links to some leading members of the faith-based Gülen movement. He said, “Turkey is not a tribal state.”

The US Embassy in Ankara on Sunday announced that it had suspended all non-immigrant visa services at its diplomatic missions in Turkey.

Local media on Monday revealed that Turkish authorities issued a detention warrant for another US Consulate staff member over alleged Gülen movement links on Sunday morning. Police were unable to detain him because he has remained in the consulate building.