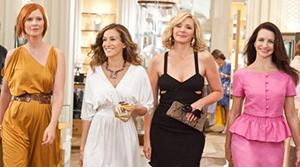 As more gossip surrounding the deflating news that Sex and the City 3 will never be a reality, we’re left to conclude that, no matter which way you look at it, Kim Cattrall is the reason it’s not going ahead.

As of press time, the main reason behind Cattrall’s decision not to reprise her role as the sexually liberated Samantha Jones is due to the “humiliating plotlines” her character, Samantha, has had to endure in both movies, including “putting on weight” and “having hot flashes.”

Now, this is interesting, because, there’s really not many things more humiliating than being stood up at your famous wedding, as Carrie was, or straight-up cheated on, as Miranda was, or perhaps crapping your pants in front of friends, as Charlotte did. And yet none of those actresses are refusing to be part of a new movie.

I can’t help but wonder, (sorry) if the reason Cattrall finds these sorts of storylines humiliating, is because they’re associated with ageing. And at 61, Cattrall is the oldest of the cast. Or, what if it’s even closer to home than that? What if Cattrall doesn’t feel like playing a vixen anymore because she simply doesn’t feel it herself? She always said she was nothing like her character.

The hideous truth about Hollywood, is that unless you’re among the handful of actors we’ve decided are in some way immortal, (Harrison Ford and Meryl Streep top this very short list) audiences aren’t all that keen on watching their beloved characters age, and then age again in other movies. So perhaps Cattrall isn’t being a diva; perhaps she’s trying to protect herself against the backlash. Because that sexist, ageist protest is trotted out every time they make a movie about those four women. And here’s the worst of it, the faces might get tighter, or more radiant. but it’s harder to turn back the clock on bodies.

I said harder – I didn’t say it was impossible. For example, did you know you can now have fillers put in your hands to make them look younger?

Natalie Abouchar, registered nurse and founder of Privée Clinic in Sydney’s Bondi Junction has been treating hands for the past eight years. It’s sounds a little far-fetched, right? Who could be bothered with such a thing?

But, in what I’m going to call a full-circle moment, it was Sarah Jessica Parker who was often cruelly singled out for her ageing hands. Parker has even opened up about it to Andy Cohen on his talk show.

“There was an article about my hands and how ugly they are and how I should go have cosmetic surgery to fix them.

“And then there was a really crude drawing of my hands as a witch’s hands.”

Parker continued, “It was so ridiculous, so outrageous to me because, here’s the thing – I will wrap this up – I love my hands. My hands, because they’ve always felt strong. I like that they weren’t feminine, but they were like, you know, really capable… And they’re my mom’s hands. And I’ve always had super veiny hands, but this is how I was born!”

She makes a valid point. Besides which, it’s not that her hands look anything other than normal, it’s just that, compared to the rest of her youthful face and extraordinary body, her hands looked their age. After all, Parker filmed the first Sex and the City movie when she was 44.

Abouchar describes the people who come to see her about their hands as “usually women who are 40-plus, and who are noticing crepey skin, loss of collagen and elastin and sun damage”.

“Filler is injected either with a needle or a cannula under the skin to hide veins and improve the texture and skin quality.”

It’s a brief procedure with no downtime. So there you have it: you may accept that you were born this way, or you may choose to tweak your hands a little.

Either way, they won’t be under the same harsh scrutiny as poor Sarah Jessica Parker’s, and for that we should all remain thankful.