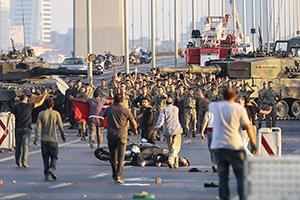 Why U.S. Relations With Turkey Are Deteriorating

With its arrest warrants and visa freezes, the Turkey-U.S. standoff looks more like a flashpoint between enemies than a difference of views among friends.

That’s because the crisis, which sent Turkish markets reeling on Monday, blew up only after years of tension and mutual recrimination. The two countries have been trading accusations that are increasingly hard to square with their status as NATO allies.

When Turkey’s president was the target of a coup attempt last year, his aides and supporters were quick to point fingers at the West. It smacked of conspiracy theory to many outsiders; but Turkey, which blamed the followers of Pennsylvania-based cleric Fethullah Gulen for the putsch, started rounding them up in their thousands.

Fifteen months later, the purge was still going on — and an American consular employee was caught up in it. His arrest on Oct. 4 triggered the current standoff. The U.S. suspended visa services for Turks, and President Recep Tayyip Erdogan retaliated in kind. The lira plunged more than 6 percent, though it’s since recouped more than half the losses.

“This is probably the worst crisis in the history of U.S.-Turkish relations, given that the U.S. authorities have for the first time targeted Turkish nationals directly,” said Naz Masraff, a director at political-risk analyst Eurasia Group in London.

Turkey is angry that Gulen hasn’t been extradited. It also objects to America’s choice of allies in the Syrian civil war: The U.S. is arming Kurdish fighters there who have ties to a violent separatist movement in Turkey. And those grievances have sharpened against the backdrop of a rapidly changing Middle East, with U.S. power apparently in retreat — driving Turkey’s search for new friends, from Russia and Iran to China.

While none of that means that Turkey is drifting away from the Western alliance, “there is a growing trust issue with our NATO allies,” said Ilnur Cevik, a chief Erdogan adviser on foreign affairs, in an interview last month. “The West feels that Turkey is slipping out of their hands. And they blame Erdogan for it. So they feel that ‘if we get rid of Erdogan, things will turn back to normal’.”

The July 2016 coup attempt certainly looked like an attempt to get rid of Turkey’s president. For ordinary Turks, the sudden eruption of violence — in a country that largely believed military intervention in politics was a thing of the past — was stunning.

Tanks rolled over vehicles, crushing civilians to death, and helicopters strafed major cities from the air. The parliament in Ankara, and the area around the presidential palace nearby, were bombed by low-flying F-16 jets. Erdogan left his seaside hotel before special forces arrived there.

For the elected government to survive this onslaught was a “triumph of democracy,” said Gulnur Aybet, another Erdogan adviser. Yet Turkey’s allies refused to see it as such, she said. In fact, they saw just the opposite, as Erdogan launched a crackdown against those he held responsible.

About 110,000 alleged supporters of Gulen were removed from state jobs; banks, businesses and media outlets were seized or shut down; tens of thousands, including army officers, academics and journalists, remain in detention.

The purges played into a view of Erdogan’s government that was increasingly widespread in the West: that it’s autocratic and unreliable. Turkey leads the world in jailing journalists. And prominent Erdogan aides, including an ex-minister and former head of a state bank, have been accused by U.S. prosecutors of conspiring to evade sanctions against Iran.

In Syria, too, U.S. and Turkish priorities have clashed. Erdogan says the U.S. is arming terrorists; but to America’s generals, who have found Syrian Kurds the most effective local fighters against Islamic State, Turkey’s objections are an obstacle to the mission of eliminating the jihadists. The U.S. had to deploy special forces to prevent its Turkish and Kurdish allies from coming to blows.

In a speech on the anniversary of the coup attempt, Erdogan referred to “our so-called allies, who are trying to besiege us along our borders.” He didn’t say who he was referring to — and, for millions of his supporters, he didn’t need to.

Not long ago, Turkey and the U.S. were in full agreement about Syria: both countries aspired to topple Bashar al-Assad. Instead, Russia intervened to save him; and Erdogan has blamed the Obama administration for failing to act. On the face of it, ties have improved under President Donald Trump, who awarded his Turkish counterpart “very high marks” when the two leaders met in New York last month.

But U.S. policy in Syria hasn’t changed much under Trump — and, now that Erdogan has been forced to abandon his goal of regime-change, Turkey is working with Russia to secure its post-war interests there. The Erdogan-Putin alliance includes coordinated deployment of peacekeeping troops. Turkey is also buying Russian missile-defense systems, raising red flags among North Atlantic Treaty Organization allies.

There have always been Turkish strategists who argue that the country should look to Eurasia, not across the Atlantic — and their voices are increasingly prominent. Erdogan has expressed interest in joining the Shanghai Cooperation Organization, the bloc pioneered by China and Russia. There’s an “outstanding window of opportunity” to increase Turkish exports to China and India, Energy Minister Berat Albayrak said Sept. 12.

Turkey’s economic ties with Western countries still weigh more heavily in the scales, while its financial system depends on “hot money,” mostly from investors in the U.S. and Europe, to fund a large external deficit. Monday’s market slump highlighted the vulnerability — and many analysts say that will spur a retreat on Erdogan’s part.

“It is likely the Turkish side will back down,” though not immediately, Eurasia’s Masraff said. “There is too much at stake for Turkey.”

Past breakdowns in ties have been repaired, including a major rift over the U.S. invasion of Iraq in 2003. Yet the context has changed: America’s current president has himself called NATO “obsolete,” and the U.S. commitment to the Middle East is increasingly being questioned by its allies there. Turkey isn’t the only one seeking to hedge its bets.

Aybet, the Erdogan adviser, said that Western countries should get used to dealing with a more assertive partner. “Things have moved on,” she said. “Turkey isn’t the same, but that doesn’t mean that it’s not an ally.”