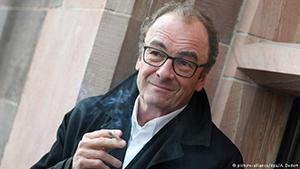 Robert Menasse is this year’s recipient of the most prestigious German-language literary award. The Austrian author scooped the German Book Prize for his novel “Die Hauptstadt.”

“The winner of the German Book Prize 2017 is Robert Menasse. He receives the honor for his novel, “Die Hauptstadt,” Heinrich Riethmüller of the Foundation of the German Publishers and Booksellers Association said in Frankfurt on Monday evening.

Menasse’s “Die Hauptstadt” takes place in the European capital of Brussels, a place where the Austrian author spent four years doing research. He takes a loving yet critical look at EU bureaucracy and human imperfections. It’s a satire, analysis and crime story all wrapped into one – and a political commentary on the importance of Europe over national egotism.

Though the books are not yet available in English translation, their placement on the short list could ensure a deal with foreign publishers. While there is no unifying theme or criteria used for their selection – other than that the books were originally written in German – jury spokesperson Katja Gasser said those shortlisted all had one thing in common: “Bold thinking.” Many of the novels also deal with the fact that the concept of Europe is currently at risk.

The German Publishers and Booksellers Association’s annual award was created in 2005 as a German-language equivalent of the Man Booker Prize or the Prix Goncourt. Deutsche Welle has been the media partner of the German Book Prize since 2006.

Last year, the award went to Bodo Kirchhoff, for “Widerfahrnis,” a title which roughly translates as “encounter.”